It was time for me to say farewell to Chicago, but first get some final kilometres under my belt before heading to the airport. I headed out to find some Chicago wildlife with my telephoto lens, not knowing quite what I would find in the city parks. My first discovery was a complete surprise – an escaped Australian parrot – a little blue female budgerigar which wasn’t quite tame enough to fly to my arm, but wasn’t far off. I hope she finds her home soon, otherwise she will not survive the winter. 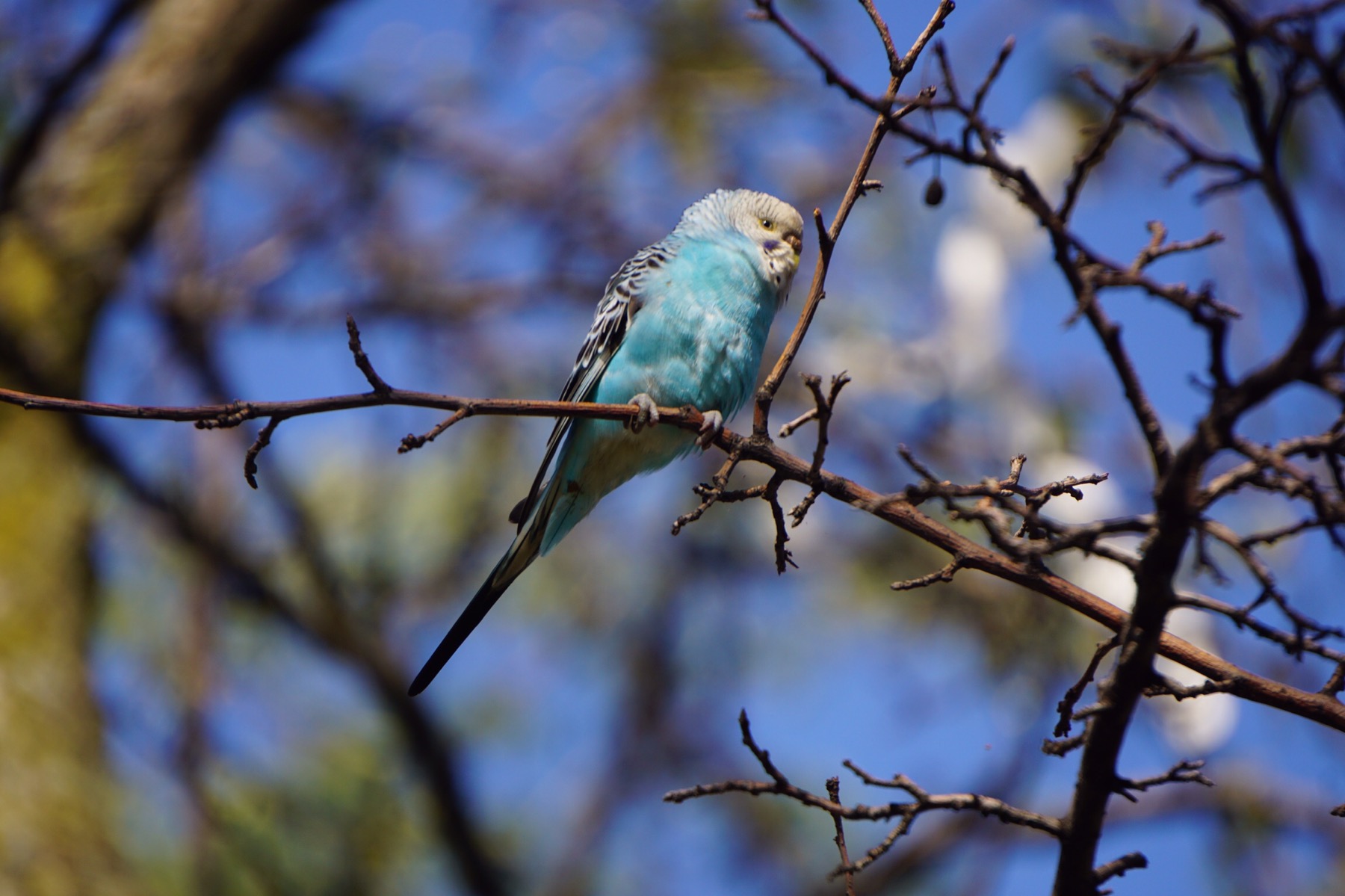 More birds revealed themselves as I strolled through the gardens, often munching on native seedheads: 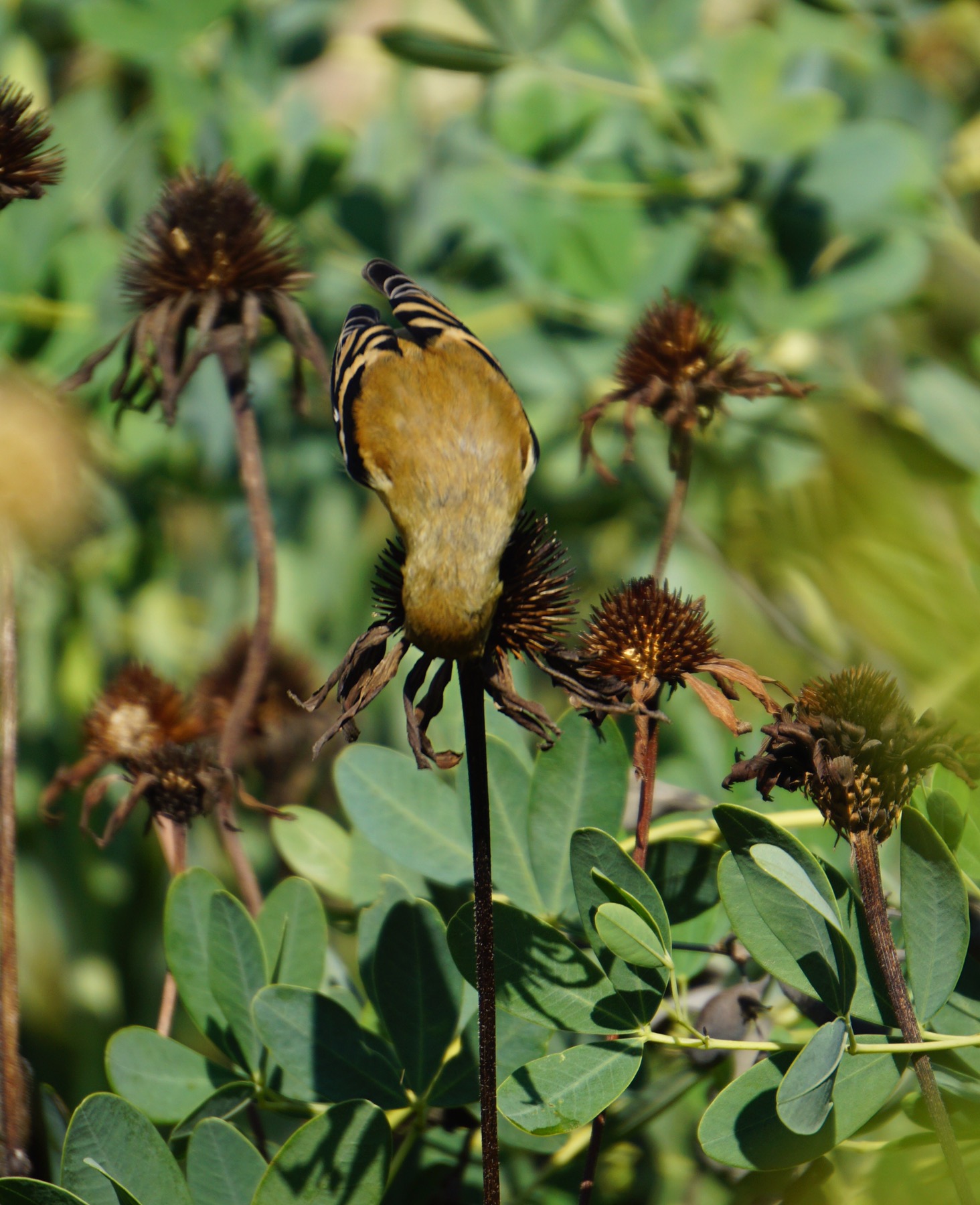 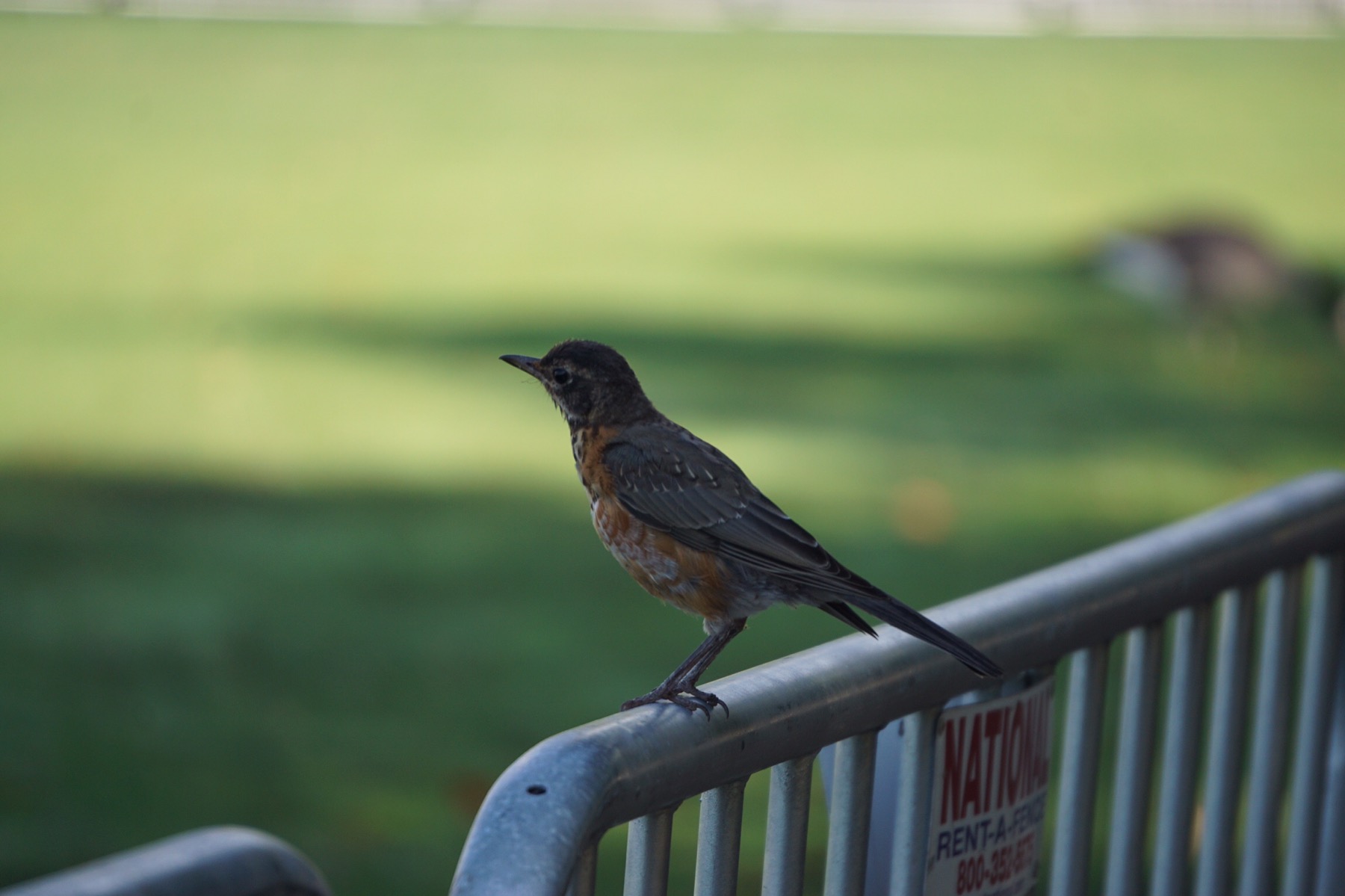 As I turned to return to the hotel, I walked back past the Art Institute of Chicago, where the cutest little squirrel was dancing around on the steps looking for snacks to bury for the winter. 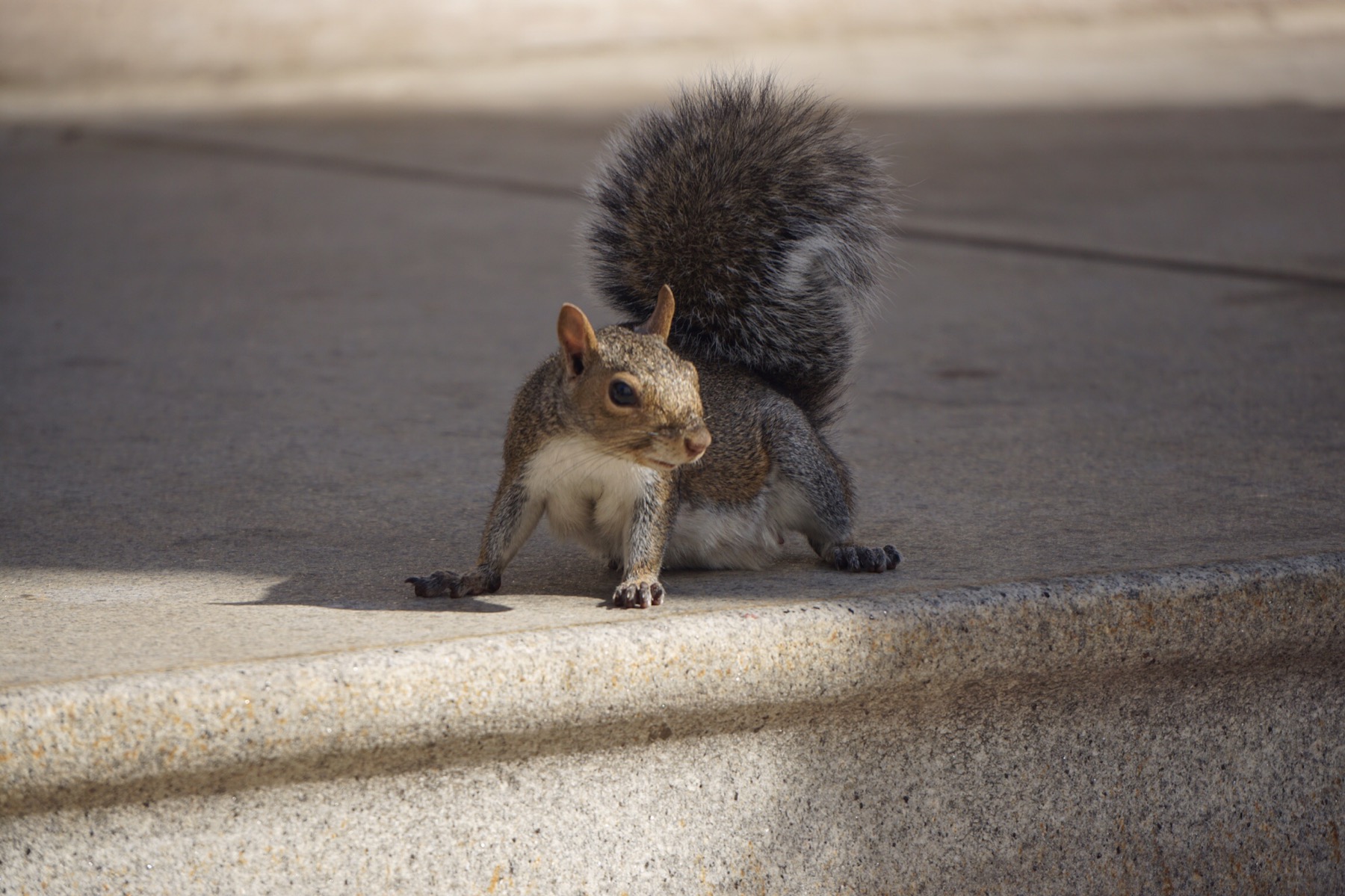 And so I showered, completed my packing and headed out for lunch at a recommended local diner. A delicious chicken and noodle salad and I was ready for the off. 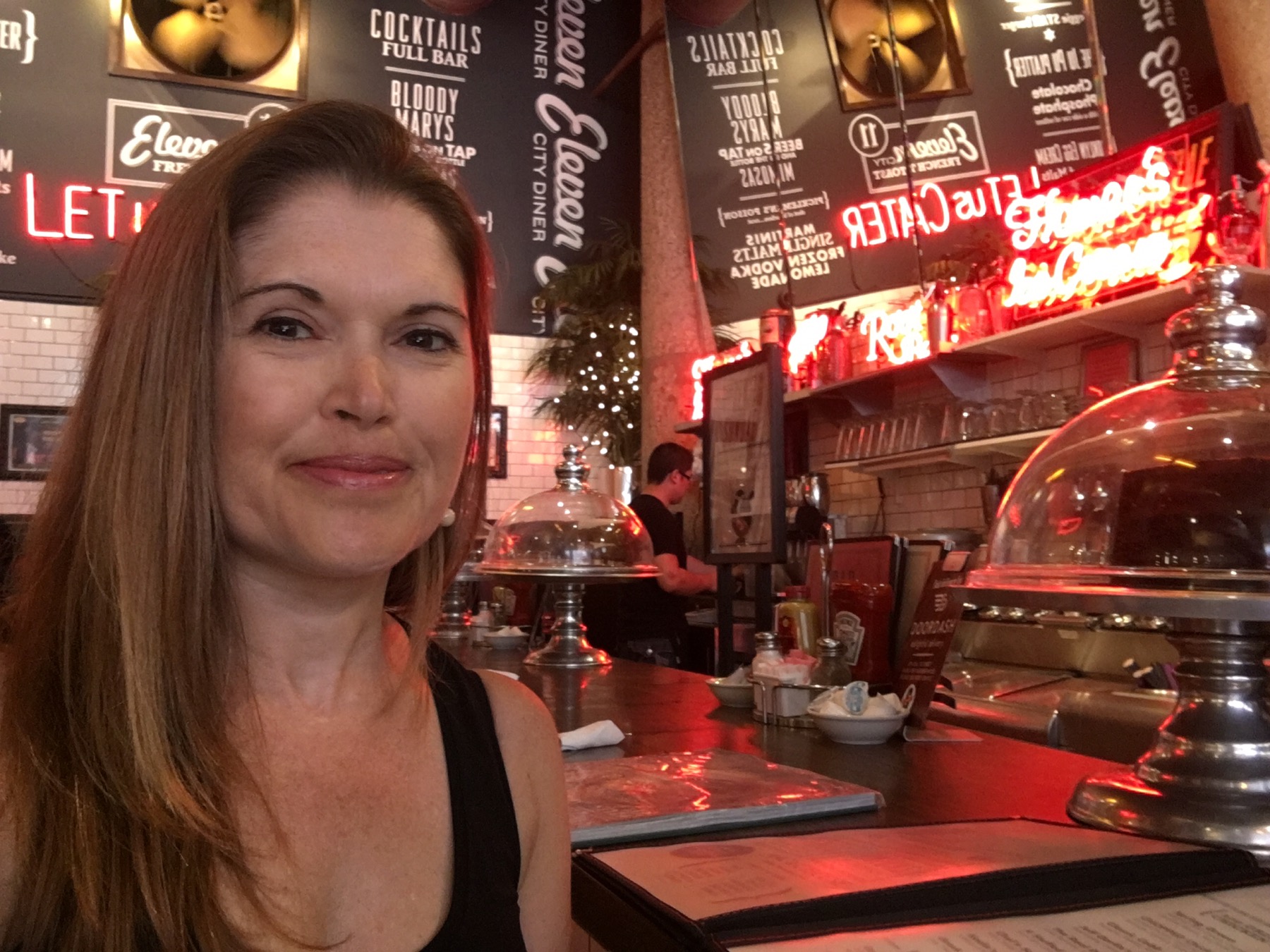 The flight from Chicago left on time and I managed to sleep about 4 hours on the way across the Atlantic to London.

7.30am at Heathrow, I collected my luggage and made my way to the London Underground and across the city to Vauxhall to friend Owen’s apartment. Owen had extremely kindly offered the use of his home to Helen (my sister) and I for the weekend, while he travelled in France with friends. He was busy with calls when I got in, but seemed relieved I was there safely, advising me there had just been a potential terror attack on the London Underground in West London, very close to where I had been travelling. I had been blissfully unaware of this, having neither phone signal or data on my phone. Phew – if that device had gone off one station later…anyhow, it didn’t and I am all fine.

I showered, did some washing, and made arrangements to meet Helen off her train from Brighton later, before rushing out to Farringdon to meet two ladies from the support group I run. We had a delicious lunch and great catch up. My next stop was Paddington Station to meet a doctor friend, Reza. He is an airway specialist and has been in New Zealand the last few months, teaching doctors in Auckland how to conduct the surgery I had about three years ago. He offered to review some videos of my trachea and share some thoughts about my recent airway issues, and I in return offered to help him refine a patient questionnaire he is designing. A fair exchange of skills I think!

From that catch up I leaped back on the train across to Victoria Station to meet Helen, and from there back to the apartment. We decided to have a quiet night in with a bottle of wine and fine dining from Tesco supermarket! It was great. The view from Owen’s apartment is truly five star. We had our own music and no interruptions from anyone – the perfect night to just catch up on everything. 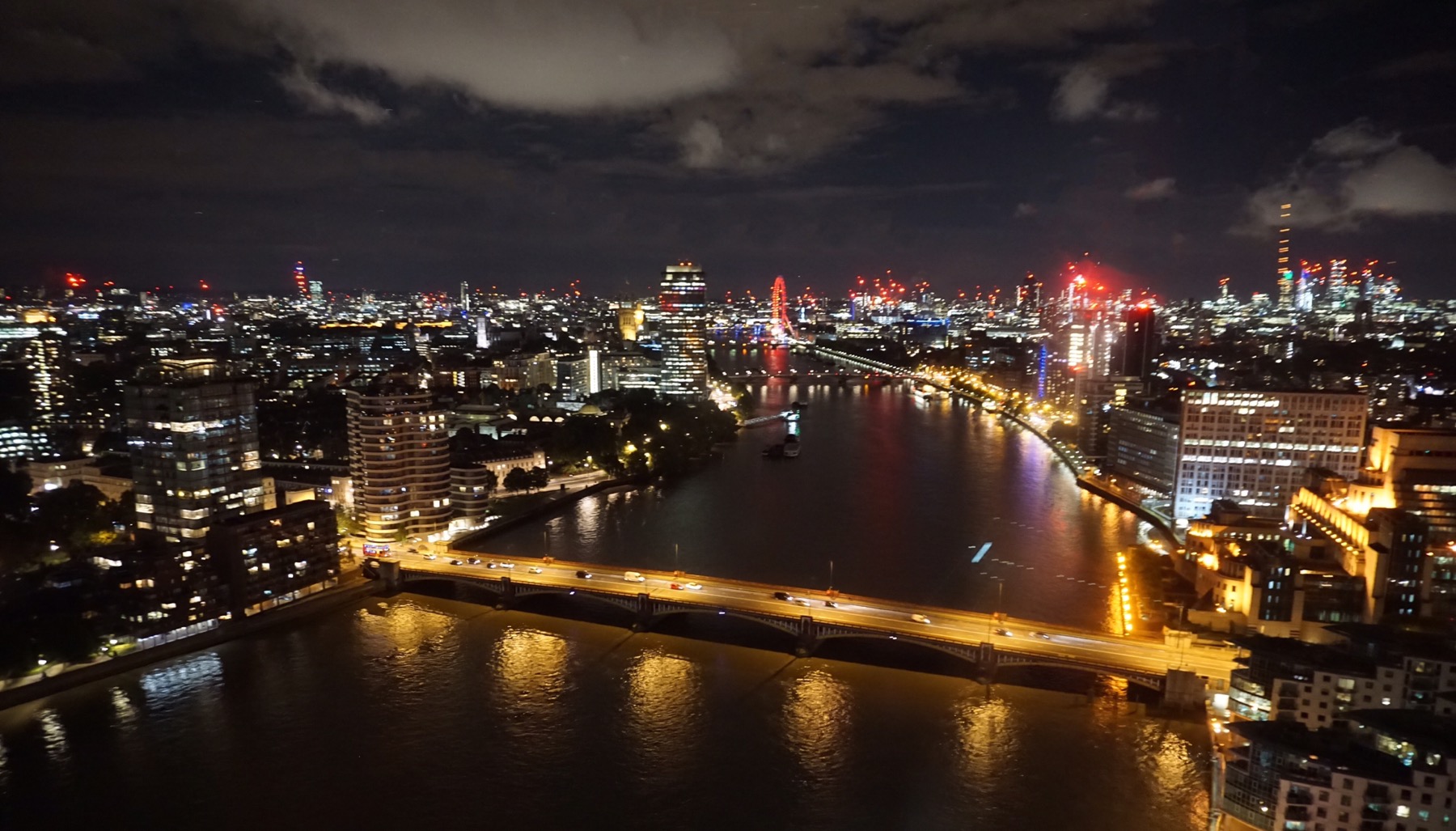 After the best night’s sleep I have had in about two weeks, I was woken with a cup of herbal tea by Helen at around 8am. Lovely. We cooked breakfast and began the day slowly, drinking in the ever changing view out of the window.  The clear breaking dawn did not last last long, with London as always reminding us that as a small island, the UK’s weather changes swiftly, bringing grey skies and occasional showers.

Our next destination was 28 floors below us, the spa. We headed down for a swim, steam and sauna, spending a couple of hours enjoying the luxury with no other folks there. I think all long flights should have this at the end of them! The perfect way to spend a grey morning. 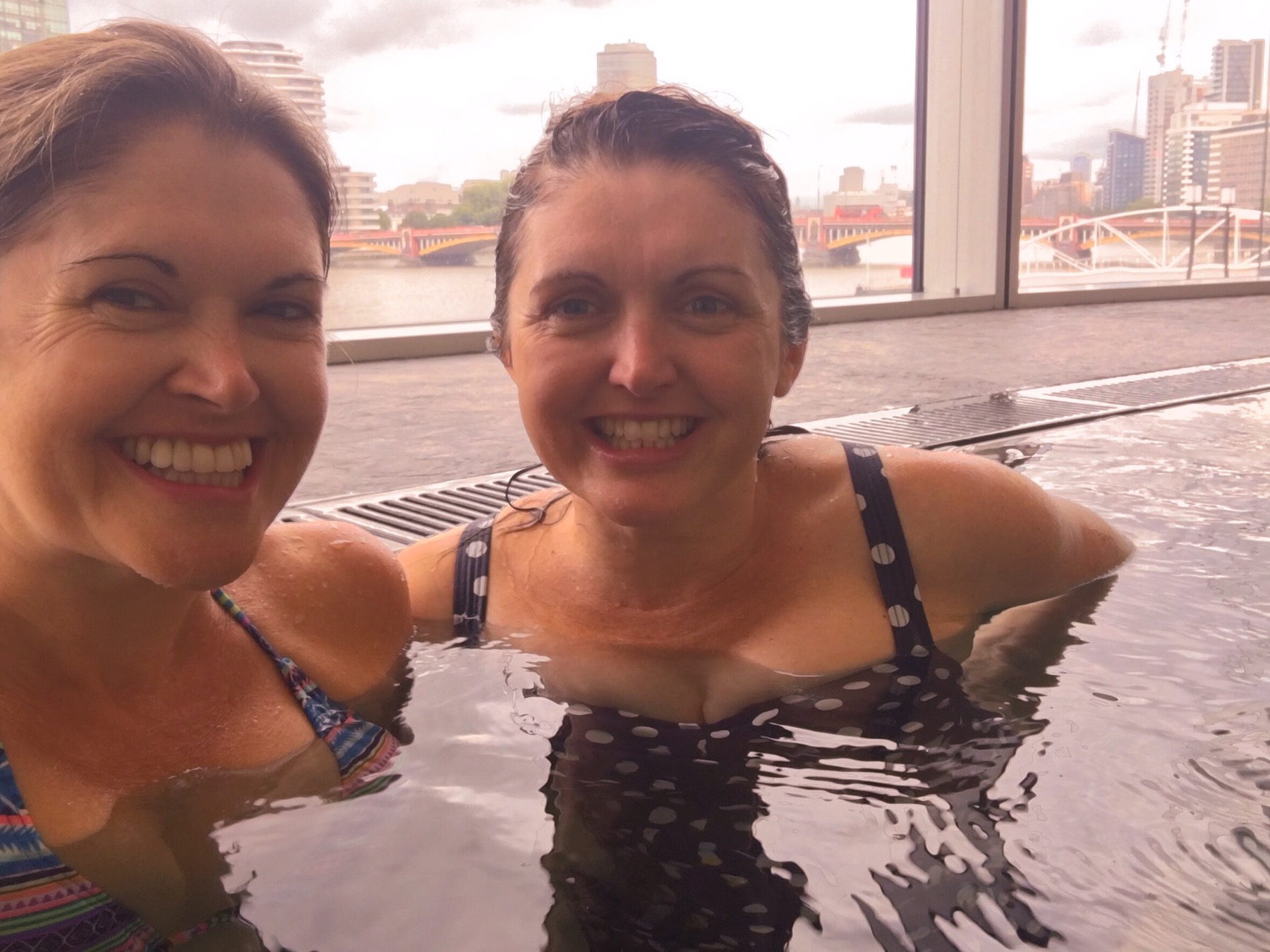 Following showers, we headed out for a stroll along the Thames Path, clocking up a 9 km circuit, before returning to the apartment to get ready for the evening. 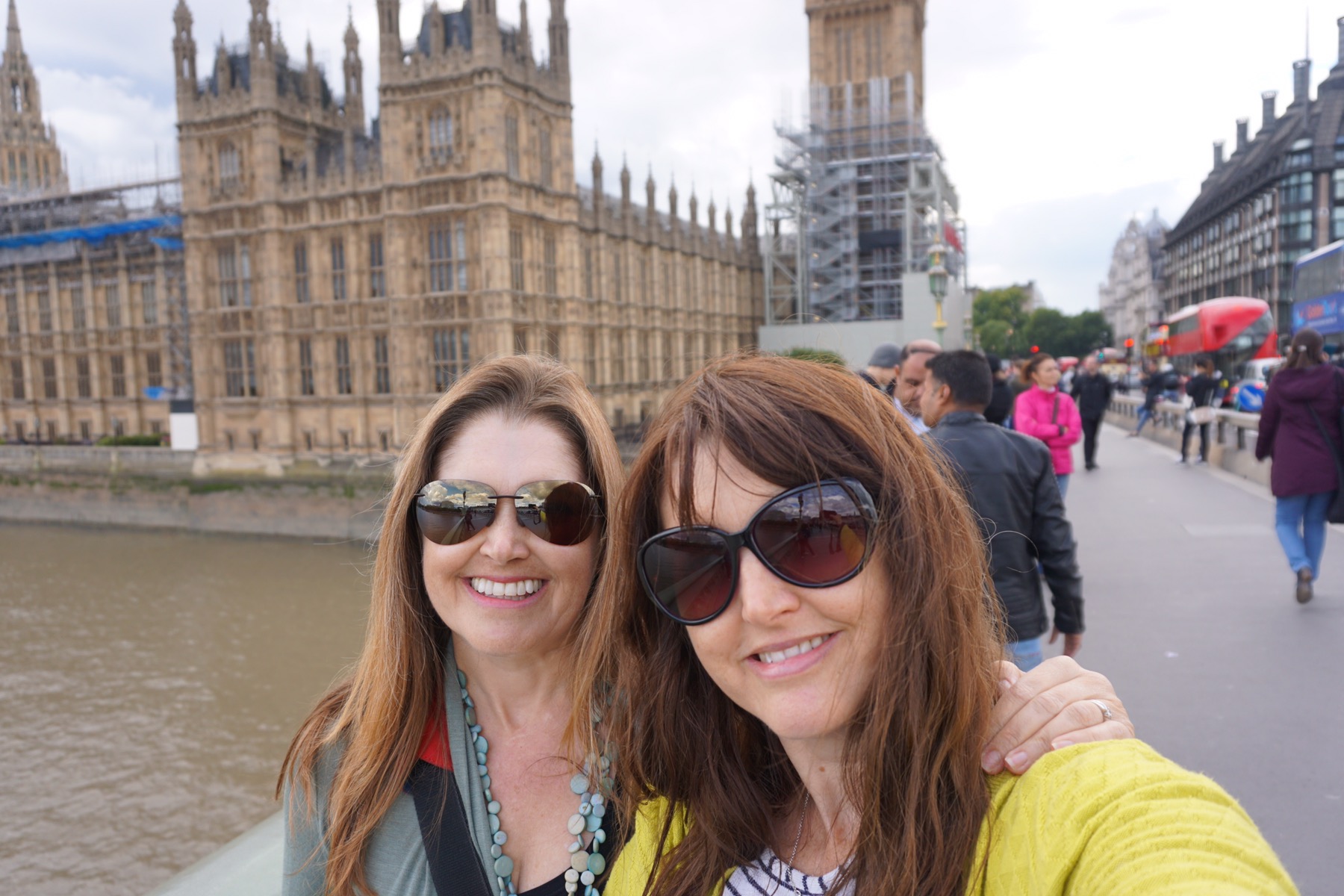 Our evening commenced at L’Opera Tavern for delicious shared tapas plates – the likes of wood pigeon and king prawns tantalised our tastebuds, accompanied by an Italian Syrah. Onwards then to the Adelphi Theatre to see Kinky Boots. It’s the tale of a Northampton Boot and Shoe factory which is going out of business, and finds a niche market making boots for transvestites. Funny, clever, incredible singing and dancing on six inch heels by six foot blokes – definitely the best musical I have seen. If it’s playing near you, don’t hesitate – go! 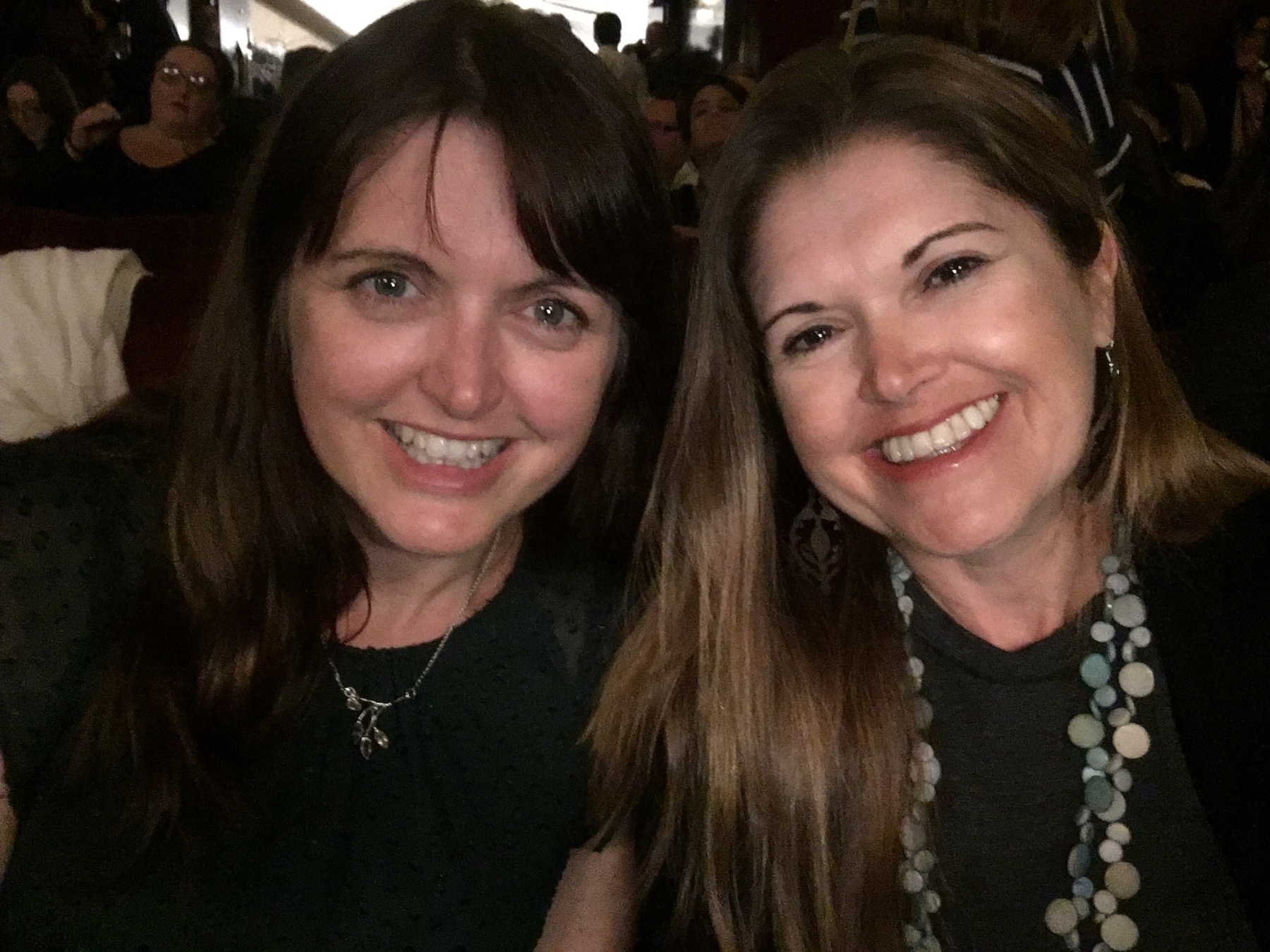 After the show we went on the hunt for chocolate sorbet (for me), finding it in a popular little gelato shop near Covent Garden Market. Absolutely delicious and presented as a rose. Here’s Helen modelling her hazelnut chocolate ice cream and berry cheesecake ice cream combination: 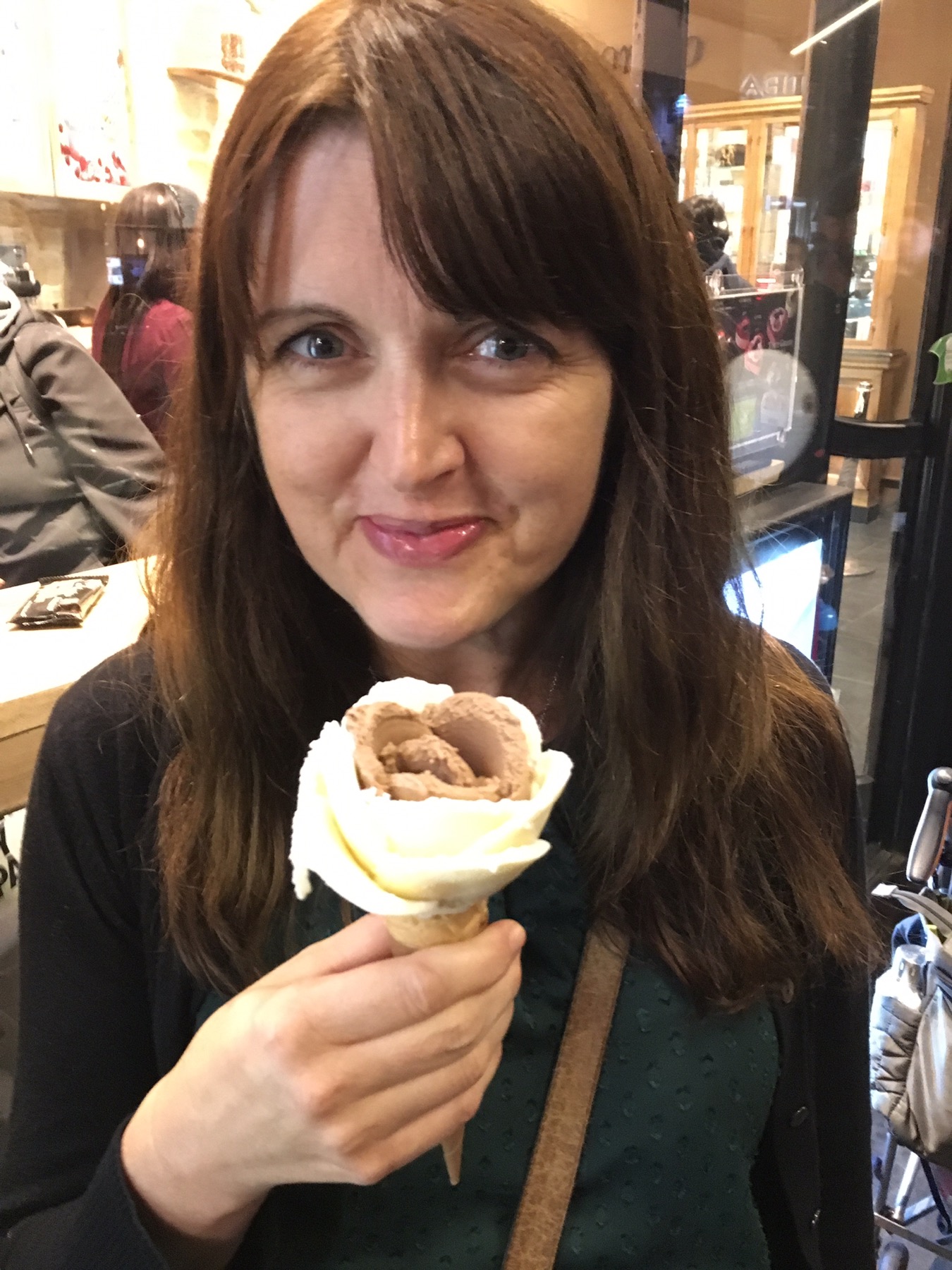 A fantastic evening out, and home to sleep by midnight!