The 8th September went on and on, as I left Forestville at 9am and arrived at my hotel at 7pm the same day. I took the longest non-stop flight in the world, the 13,800km QF7 to Dallas, then rushed through the airport to get to my connection to Chicago, catching it by the skin of my teeth. Unfortunately my luggage didn’t have the same luck, and arrived sometime during the night.

The USA is in a bit of a frenzy with Hurricane Irma about to hit the whole state of Florida and everyone ordered to evacuate. Chicago airport had multiple stressed looking families with piles of luggage who have escaped the danger zone, relieved to be safe while wondering what they will end up going home to after the storm has passed. There is little else on the news programmes.

Chicago meanwhile is calm and safe with no storms forecast here. Once I had checked in, had a long hot shower, and then put my travelling clothes back on (still no luggage at this point), I headed out to explore, despite it being dark out there! My hotel is very centrally located, opposite Grant Park and Lake Michigan. Crossing the road my first sight is an 8 piece Latino band playing salsa with around 100 people wriggling their hips on the temporary dance floor. A fabulous atmosphere, all free, with many local people sitting around with chairs and picnics enjoying the show. 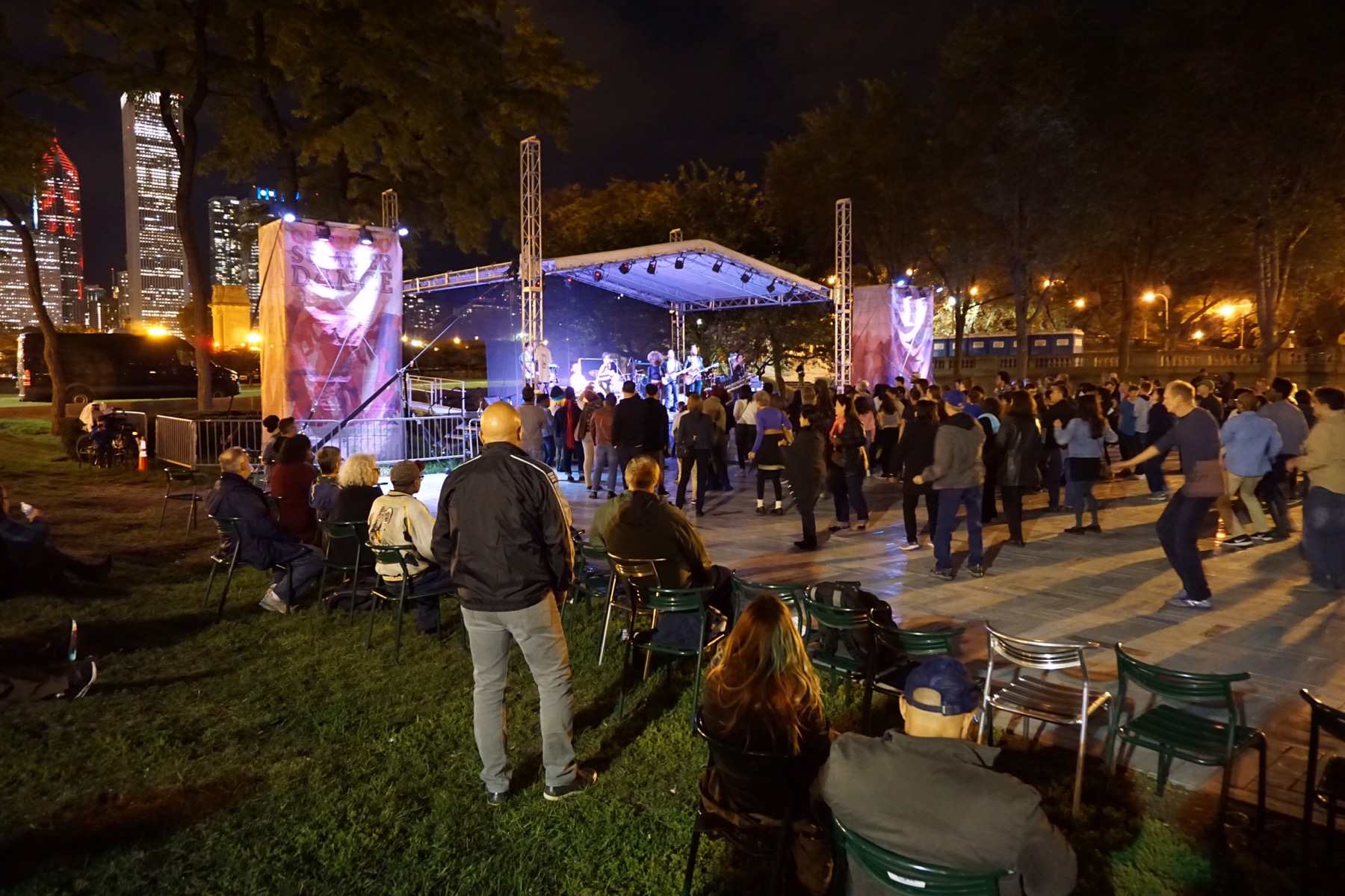 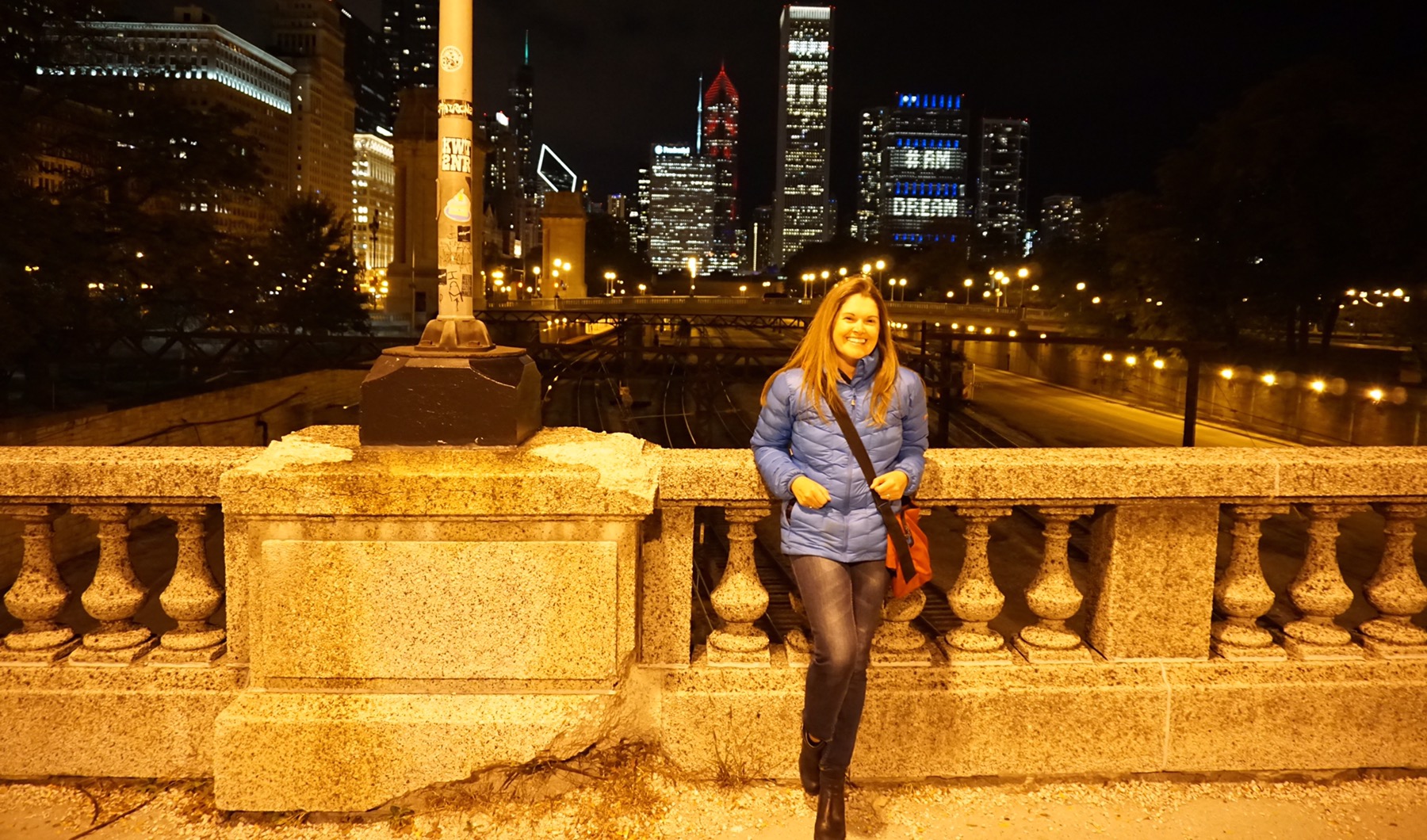 I continued my tour, heading over to the Buckingham Fountain – stunningly lit up agains the backdrop of the city. I was pleased I took my camera with me, and I joined many other photographers taking photos of the spectacle. Behind the fountain was the Windy City Wine Festival kicking off – I wasn’t game to go for a solo tasting after being awake for nearly 30 hours though!

Saturday morning began early, with jet lag ensuring sleep was totally absent. My luggage had arrived so I could finally change clothes and freshen up properly before heading out to explore in daylight. I headed across the park to the lake and took the lakeside walk along to the Navy Pier. Here I booked myself on an Archtecture Boat Tour of Chicago.

Chicago has a river running right through the centre of the city, in the past polluted and unpleasant, but in the past thirty years has been cleaned up, and more recently a riverside walk opened up and sustainable plantings to encourage the return of native fish. The boat travelled along the three arms of the river, with a self professed architecure geek giving an interesting and humourous commentary about the buildings around us. I learned so much, in particular how to see the buildings as sculptures with a historical context. The 75 minute tour went quickly and it was soon time for lunch. 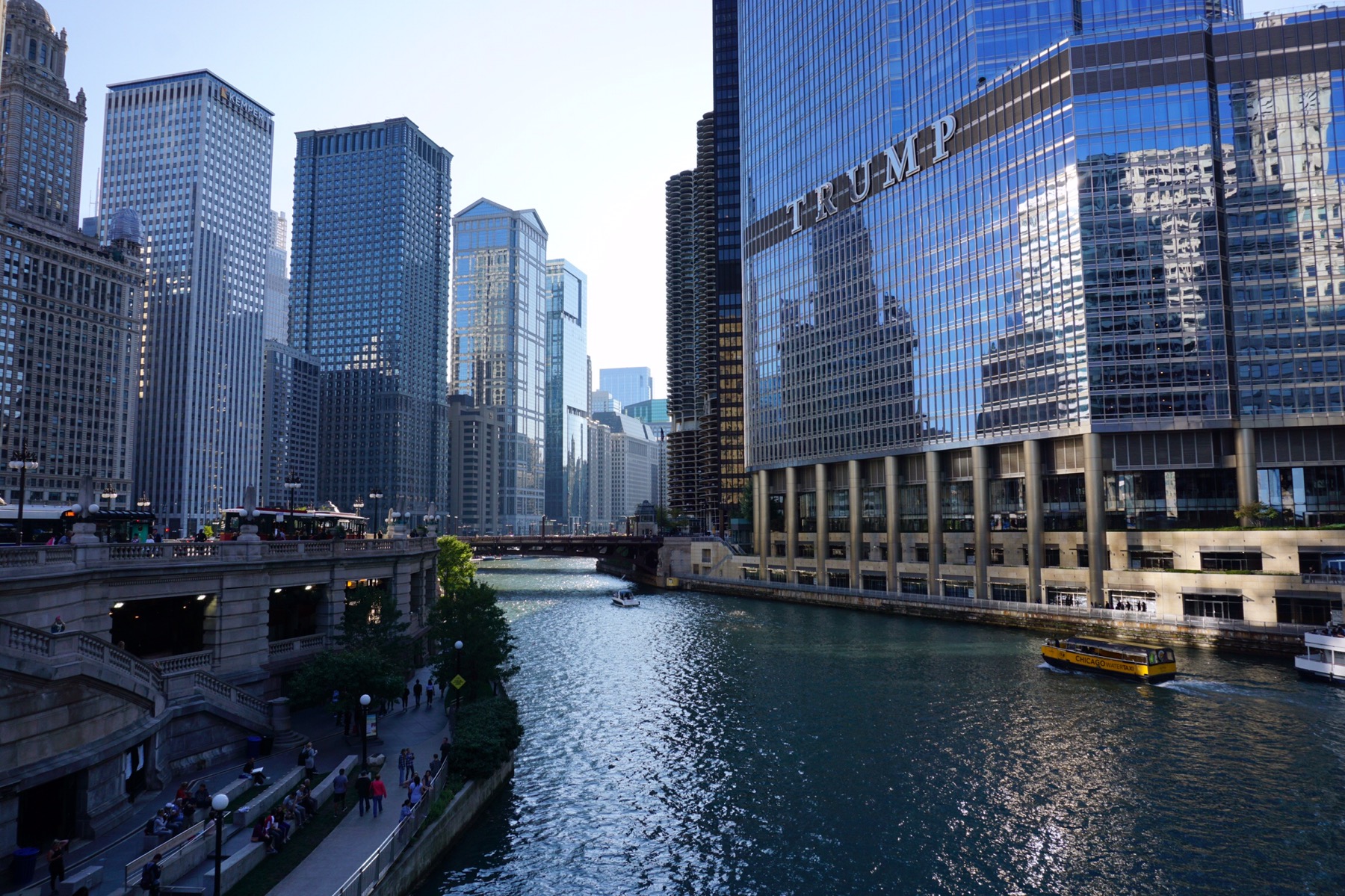 After a bite to eat it was on with the exploring, walking through more parks on my way to the Museum of Contemporary Art. There are 570 parks in Chicago, meaning that you are never far away from a patch of green and trees. It makes for a very attractive city. 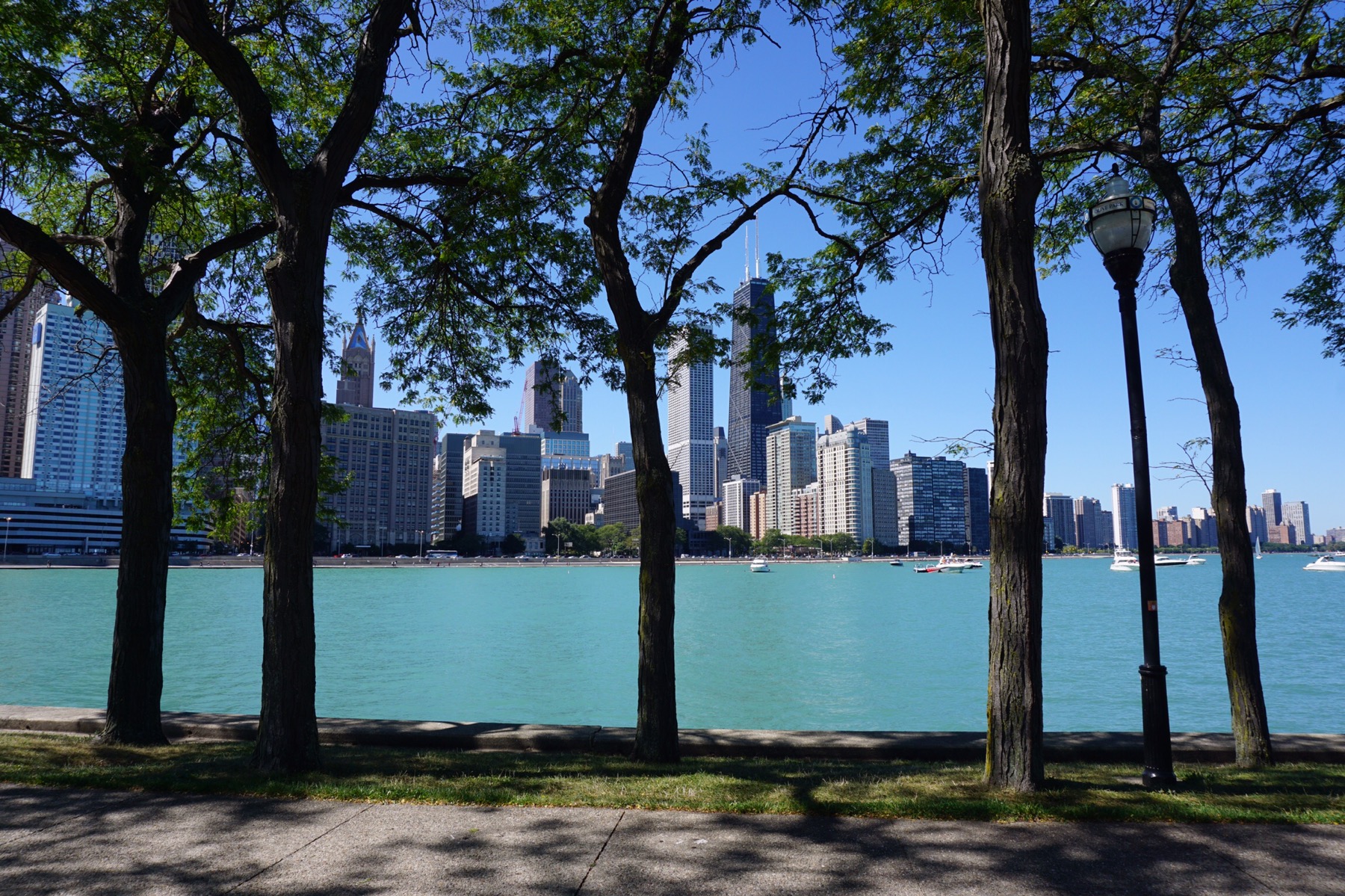 At the MCA I paid my entry and went to see the primary exhibition of paintings and prints by Japanese Takeshita Murakami. Some interesting artworks, many based on Anime and Japanese folk law – I think I might have found the next ‘impossible’ jigsaw for Donna and Andy! 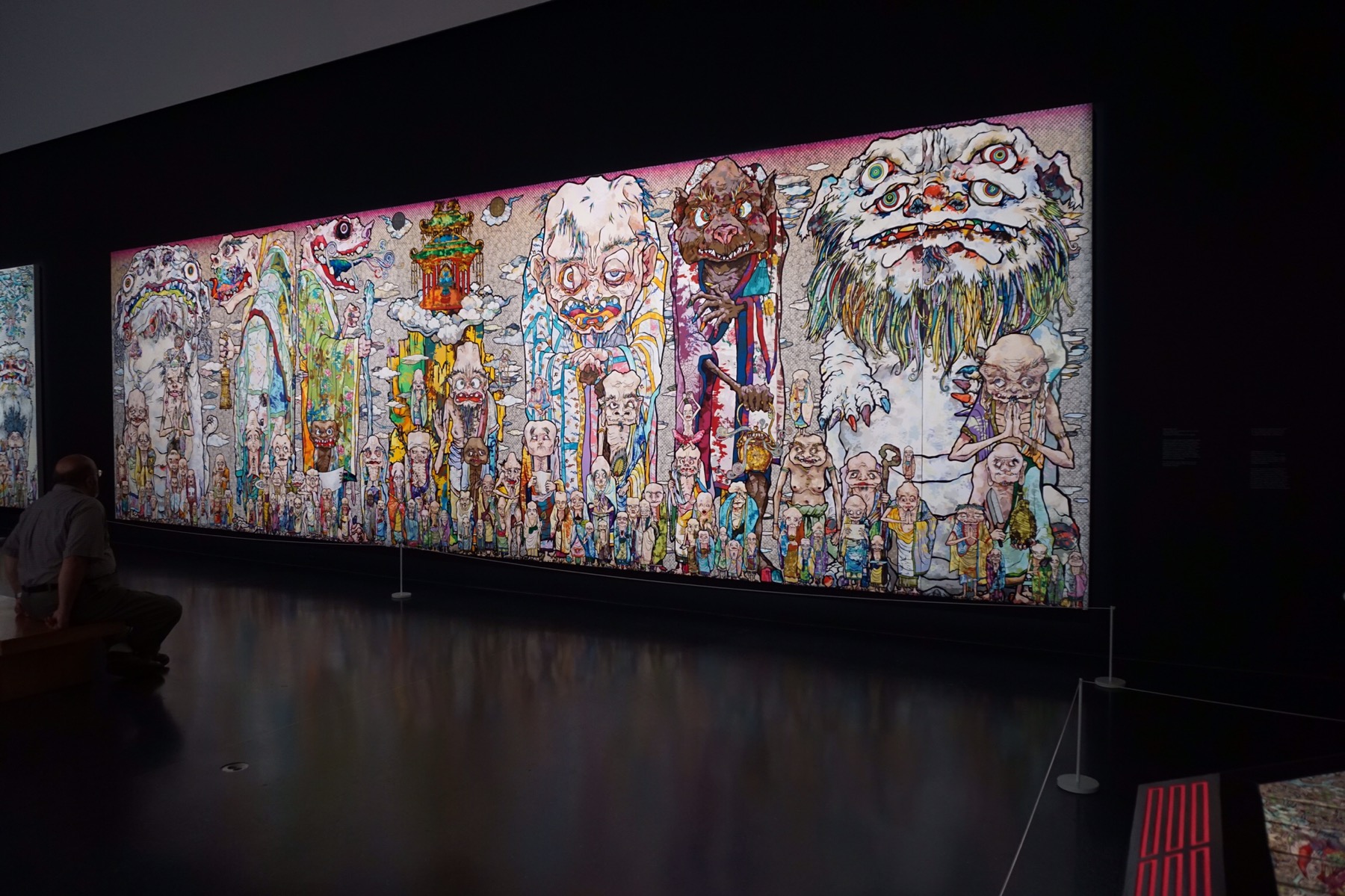 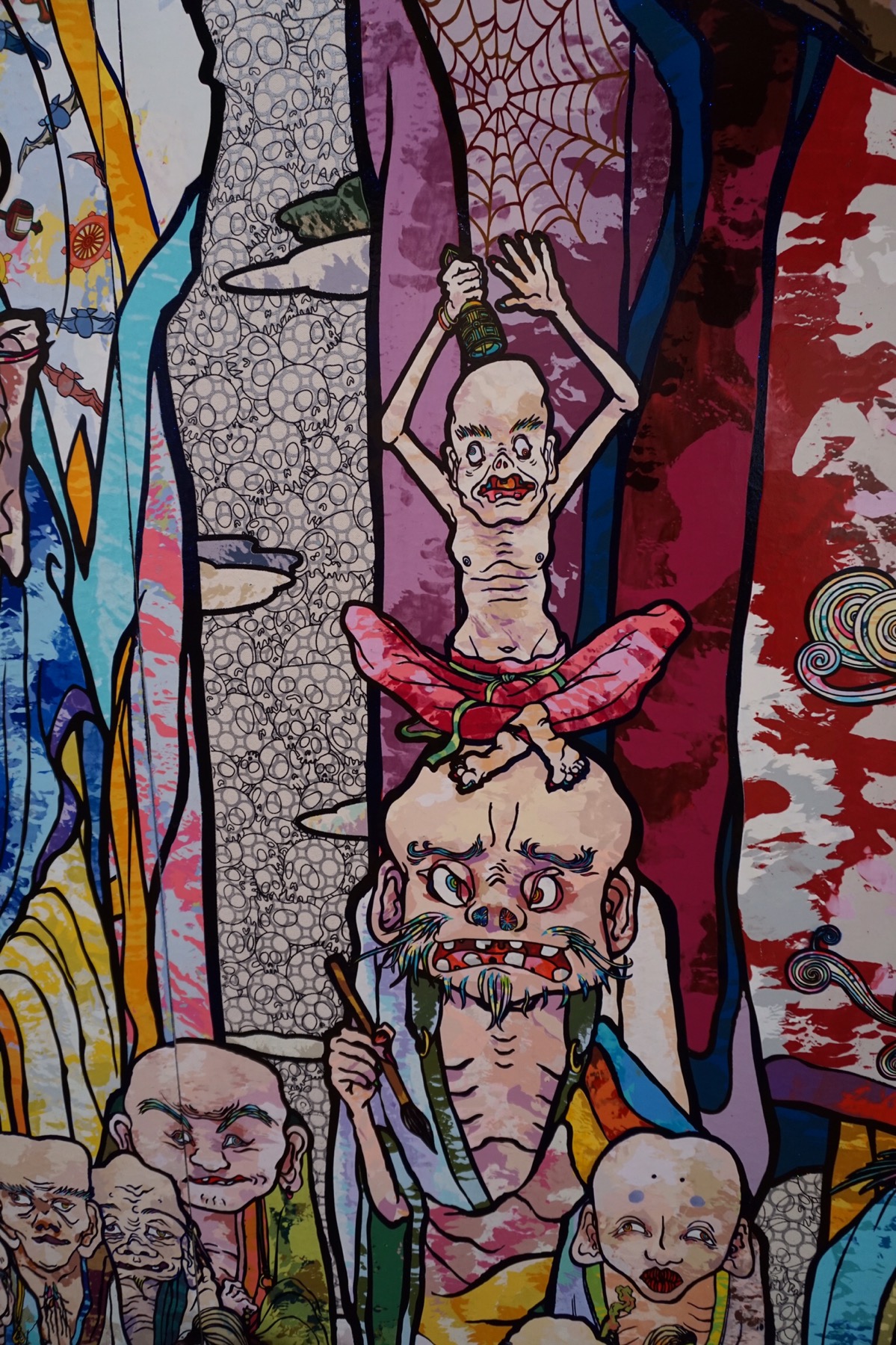 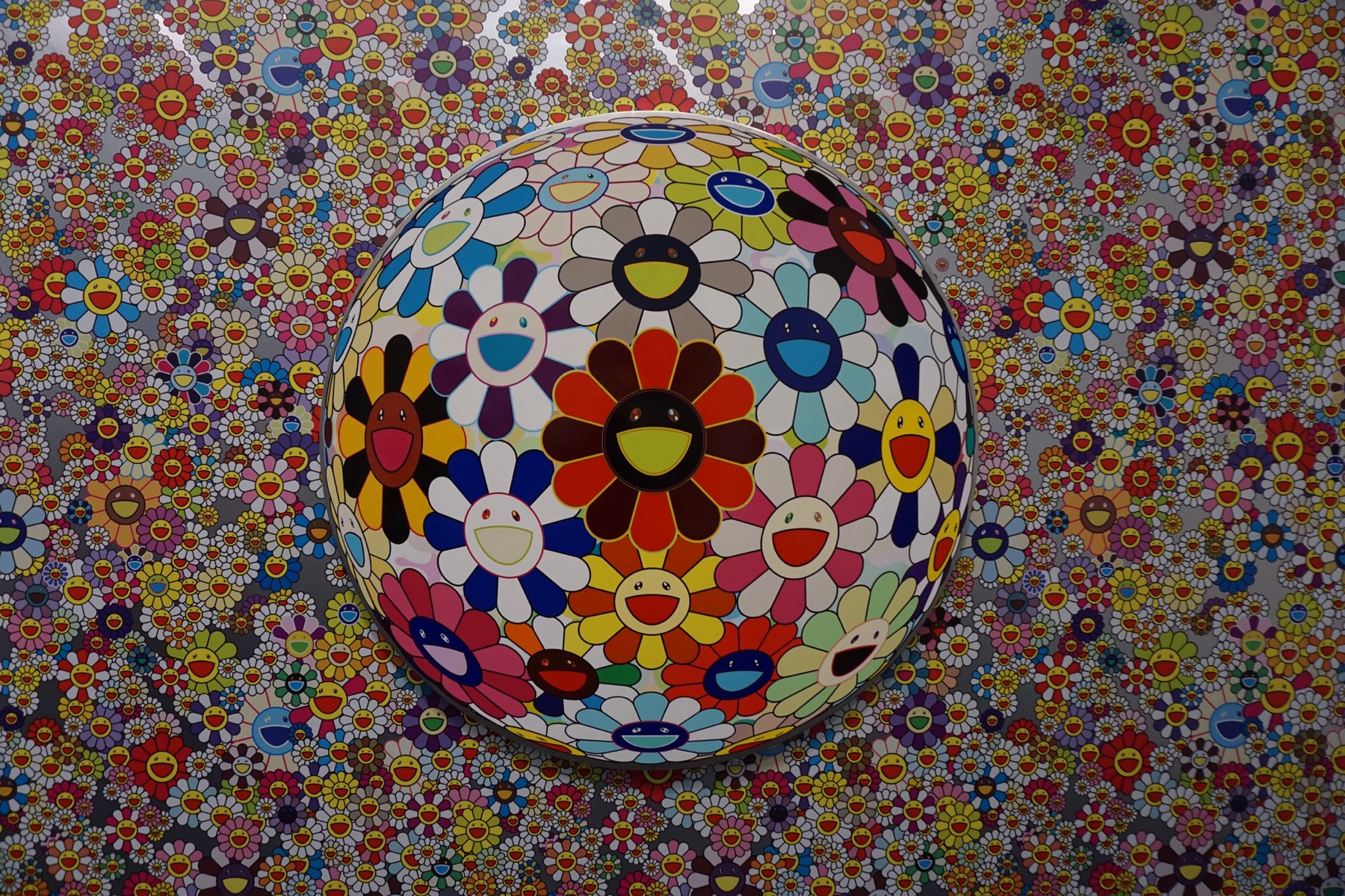 By the time I left the gallery I really was feeling the effects of only 4 hours sleep since Thursday night, and began to head back to the hotel…diverting briefly to do a little shopping and get a local SIM card. As much as I hoped I could do without an active phone, I am finding there is very little working free wi-fi and it is challenging to look anything up offline.

Back at the hotel by 6pm I had a 40 minute nap, then went to a local cafe for some food.  I really like Chicago. It feels quite like Sydney – very international, welcoming, young, vibrant, clean and safe. I chatted to a lady at the cafe while I was waiting for my food. She had lived here for 8 years and gave me some good tips and ideas for tomorrow. So much to do!