Thursday: We survived the storm in Kiama, emerging unscathed to head a short way south to Berry. We’re fortunate to have good friends living there not far from Seven Mile Beach, and parked up the Zone at the top of their property.

After a cup of tea with Barb, Mr A and I decided we ought to get out for a walk, despite another impending rainstorm. We drove down to the very deserted beach, arriving just as the heavens opened! 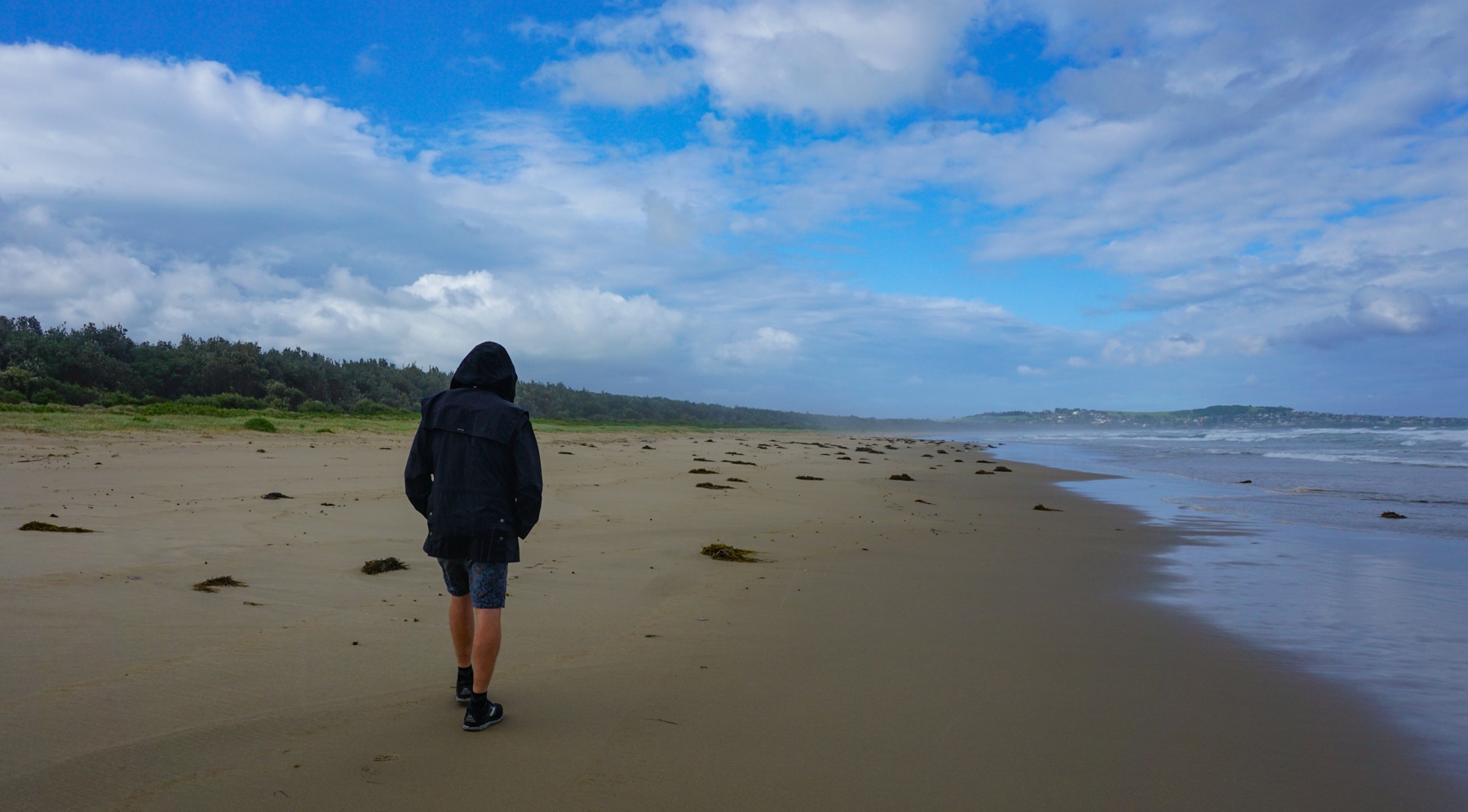 The weather didn’t stop us, and we enjoyed the hike with the rain and wind at our backs, with the shower stopping in time for our return route. 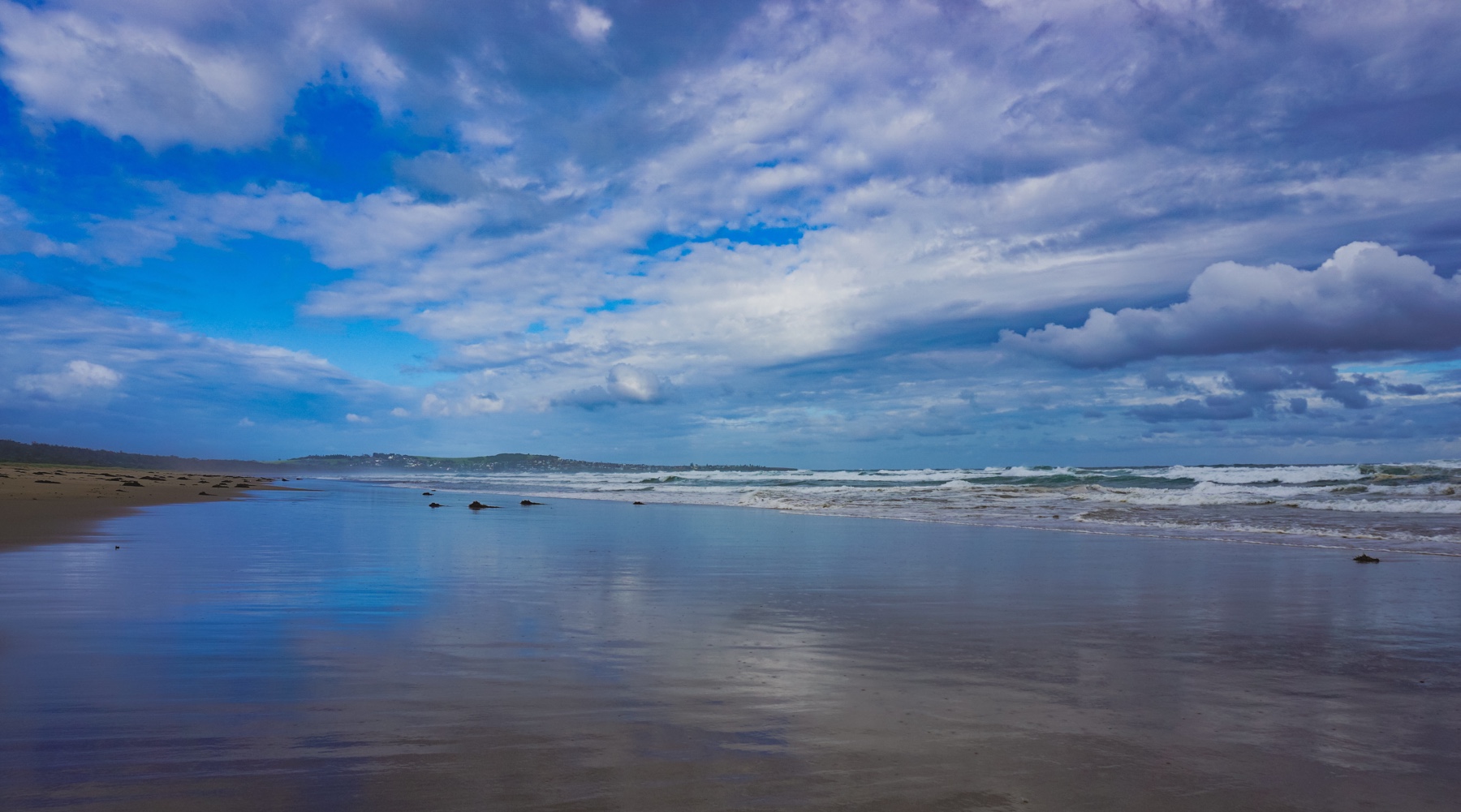 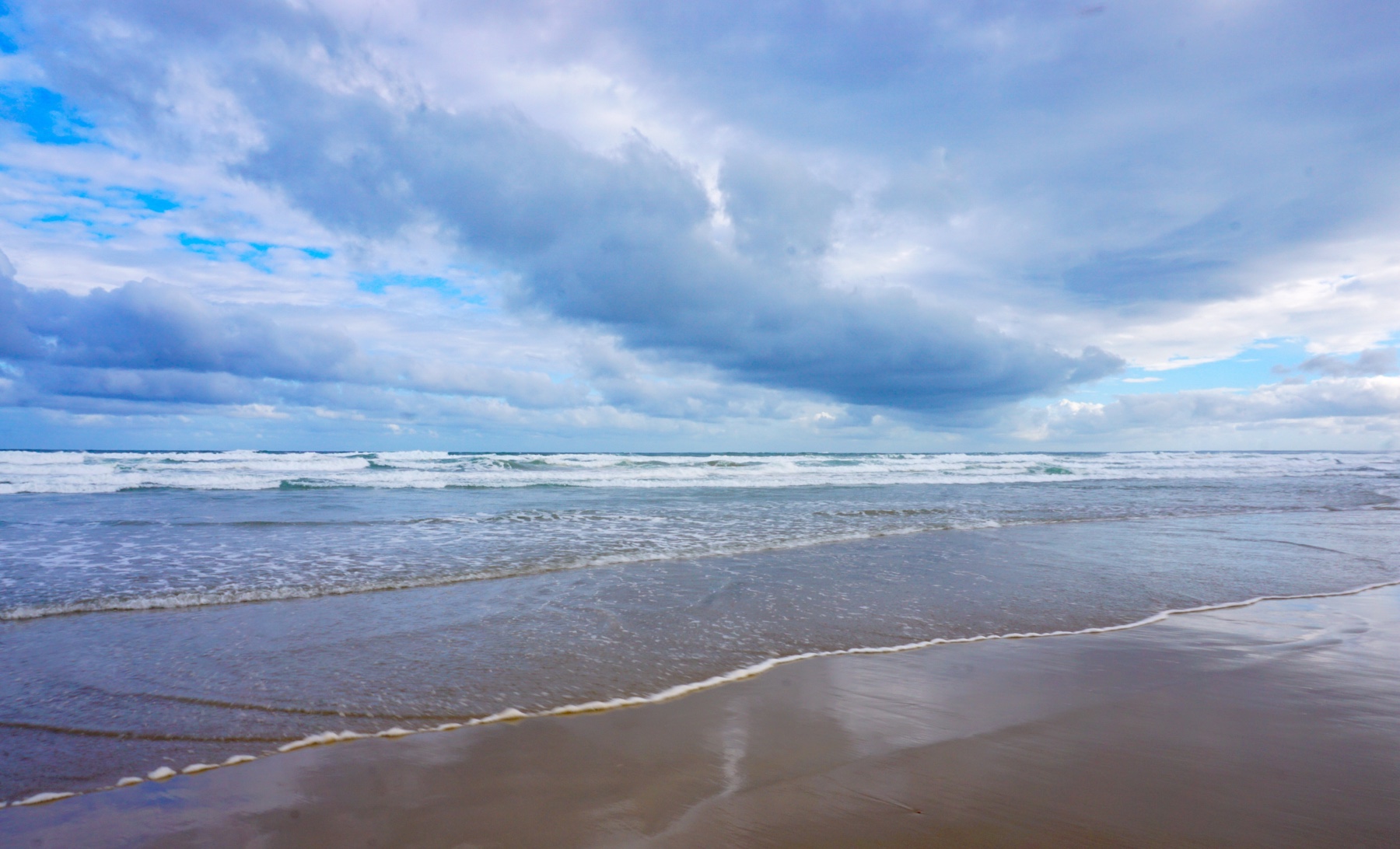 We enjoyed a great evening with Barb and Omar, a delicious chicken hotpot and some fine wine of course, before retiring to our bed up on the hill, lulled to sleep by a chorus of croaking frogs. Very relaxing indeed!

Friday: The day dawned bright and sunny, and we got a chance to admire our fine view across to Budderoo National Park. 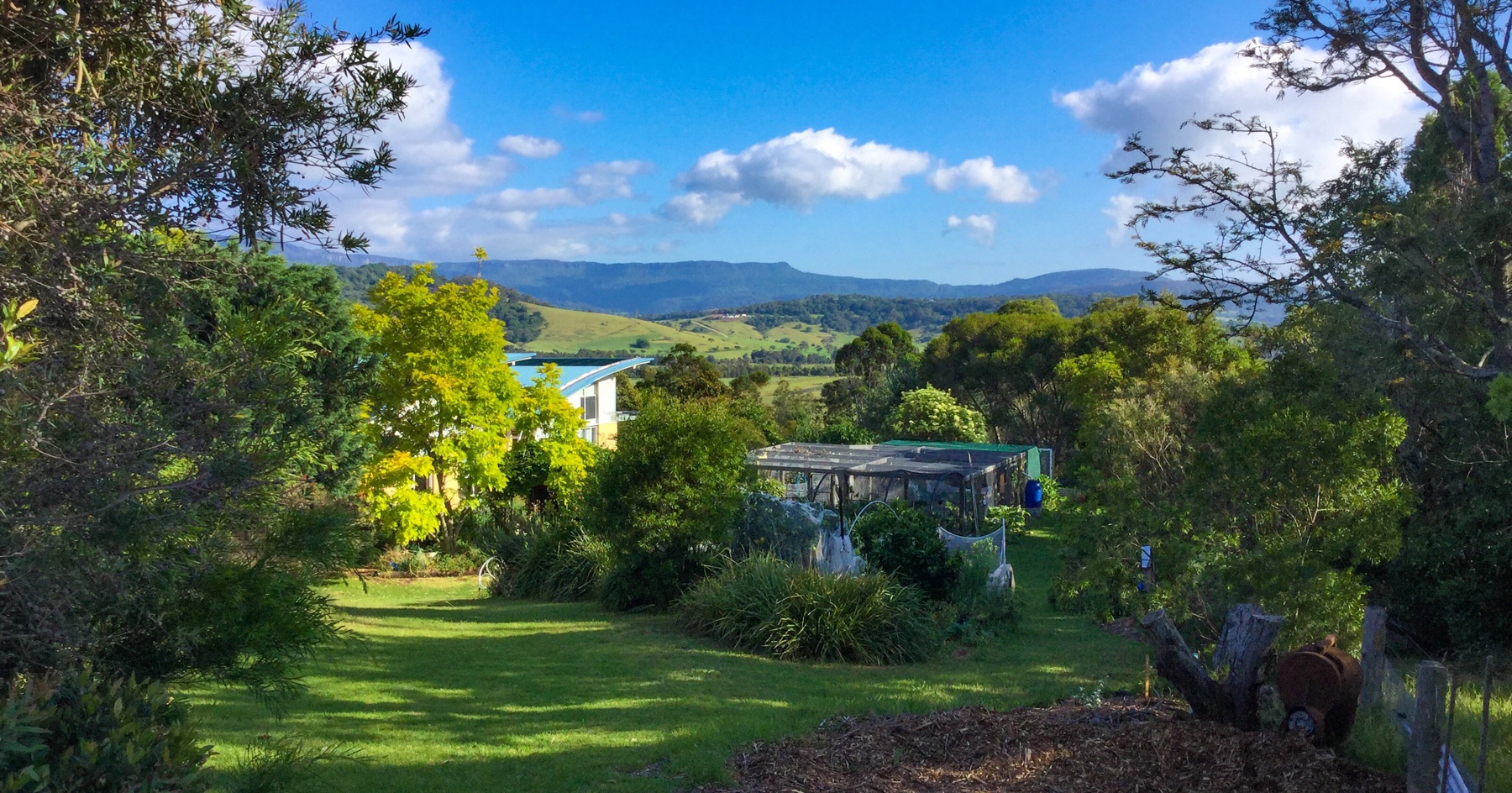 We had a delicious breakfast in Berry with Barb, Omar and another friend, Joanne who happened to be in town, before taking our kayak down to Broughton Creek and launching it for a paddle. After all our hard work the past few weeks, this was finally us reaping our reward, and the morning was perfect for it. 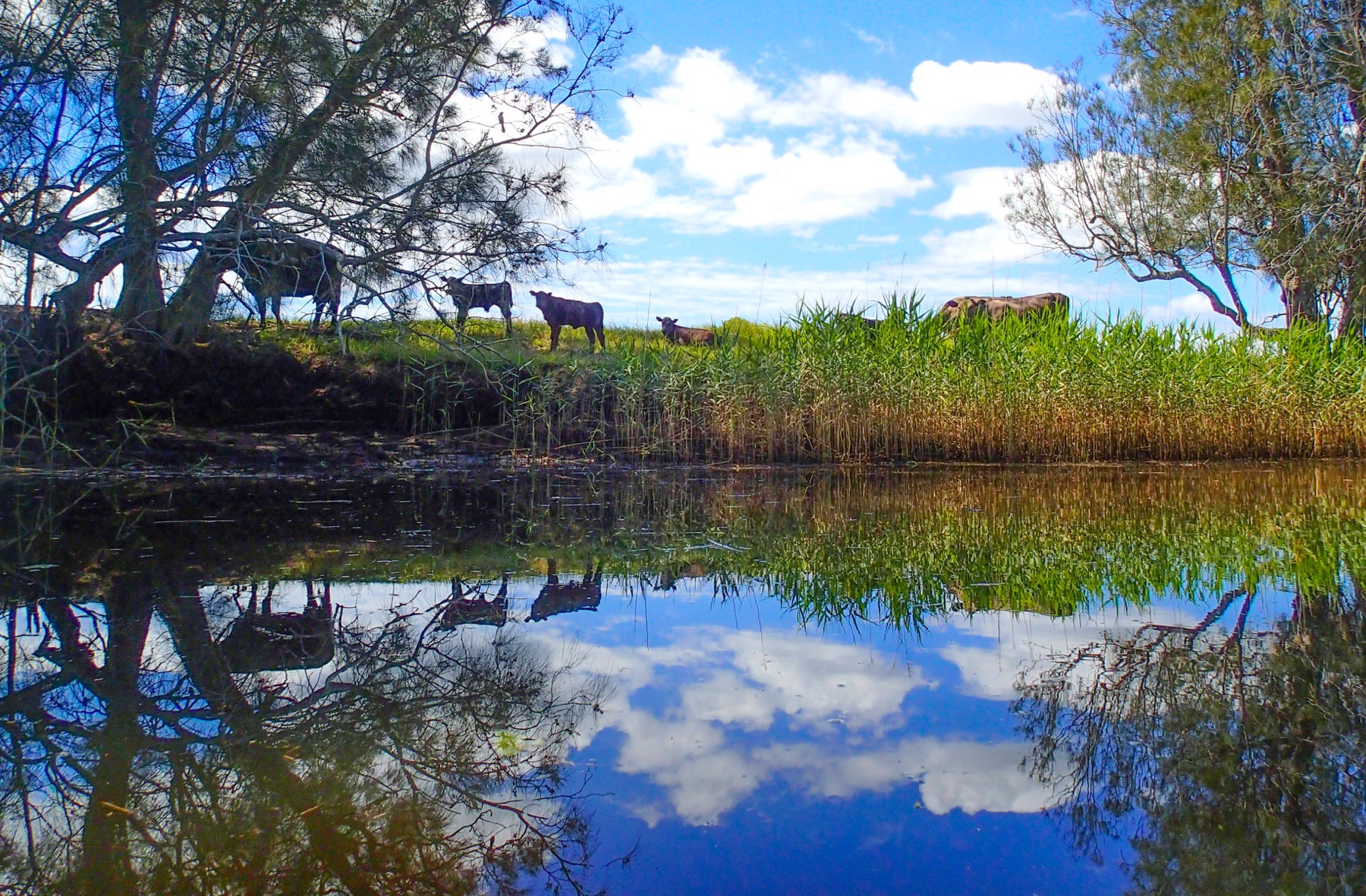 Spring has truly sprung here, and the riverside was lined with young calves, staring in shock at this 7+ metre giant boat cruising past. There was not a breath of wind, providing us with some amazing mirror-like reflections. 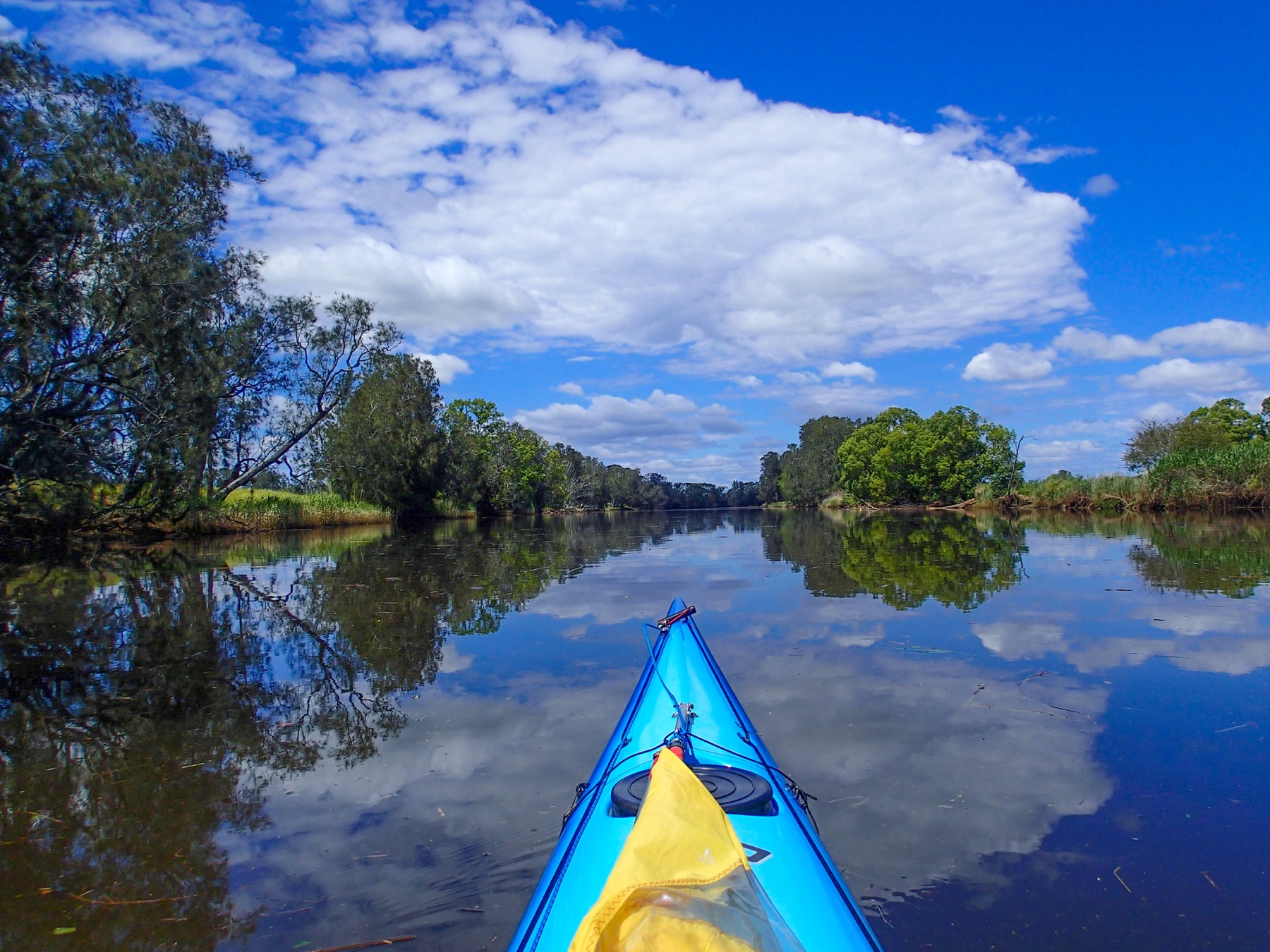 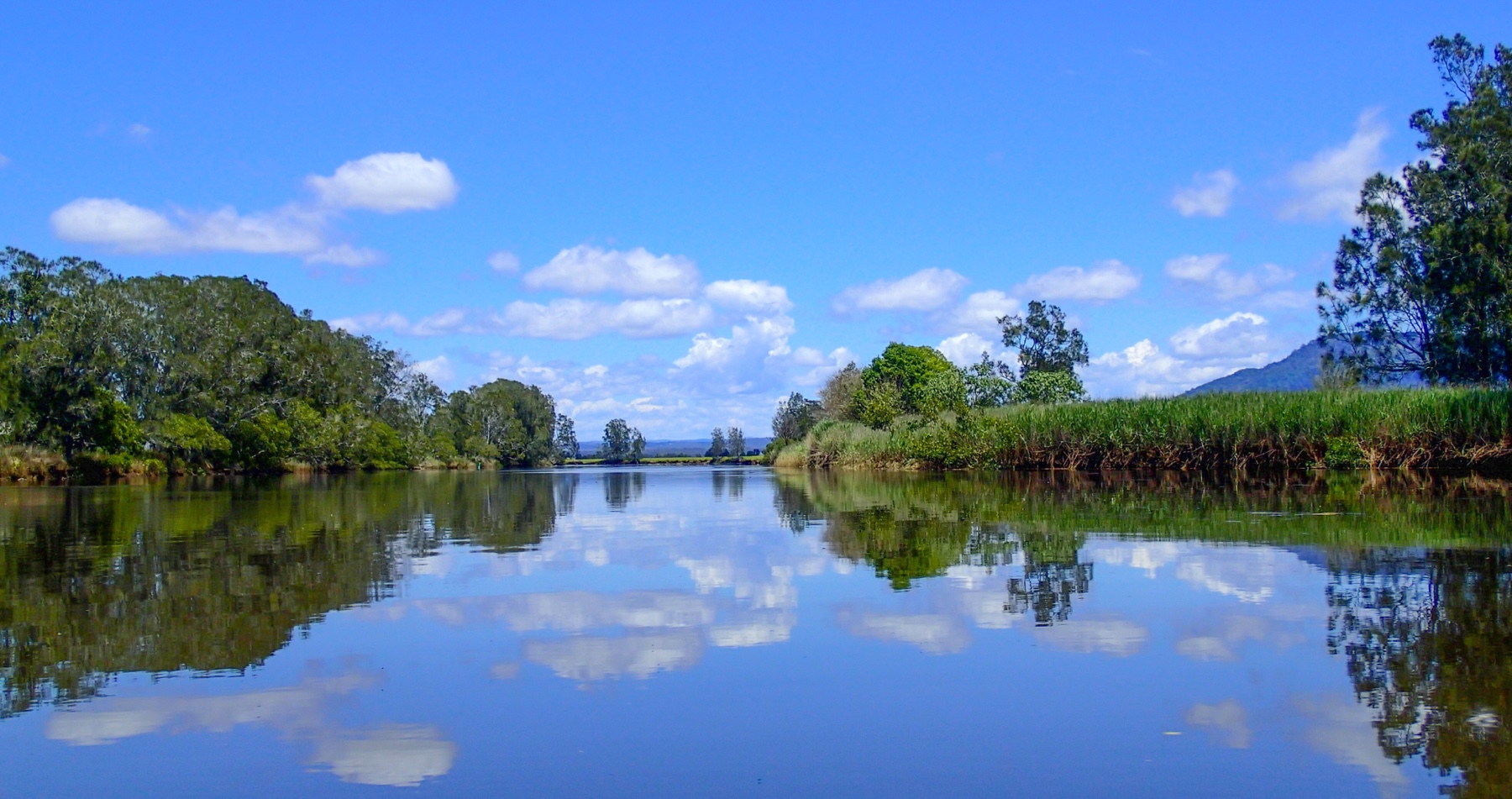 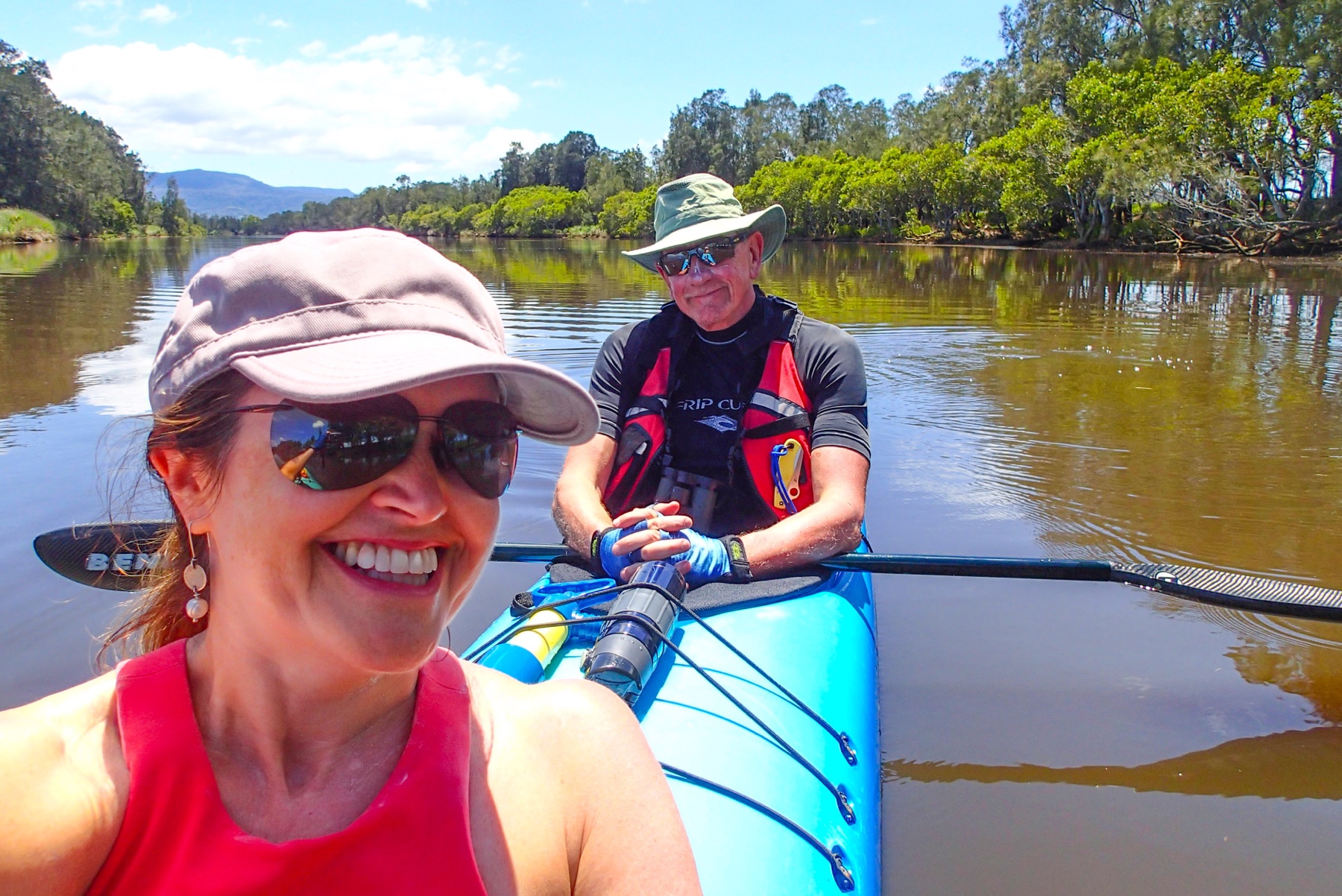 We paddled just over 9km, before returning for hot showers and a relaxing afternoon. It’s been a while since we’ve been allowed such luxury!

The four of us concluded the day with a delicious Thai feast at Leaf, a local Berry restaurant, before retiring for the night. What a perfect start to our time away from home!

It was time to move on from Kiama, so we packed up, hitched up and drove off south down the coast. Our first destination was Black Head Reserve in Gerroa, where we were able to park up and enjoy breakfast with fabulous ocean views in every direction. The morning was overcast and somewhat hazy, the humidity high. From there we drove further south and towards Berry, where we pulled into our friends acreage and set up camp on their lawn.

Barb is an old friend I originally met at work – we’ve known her and Omar for about 17 years. They moved down to Berry several years ago and have a fabulous time on their property – currently with lawn mowing sheep, hens and lots of vegetables. Over the years they have also experimented with pigs, guinea fowl and a trout farm in their swimming pool. You never know what to expect when you arrive, other than a multitude of bikes, excellent fresh food and great conversation.

We were somewhat tied to the tide, so to say, and had no sooner arrived than were jumping on our bikes (I borrowed a fat bike) and riding the short way down from the house to the beach for a ride. The giant tyres on the bikes help you to plough your way across the sand for a ride – great fun. 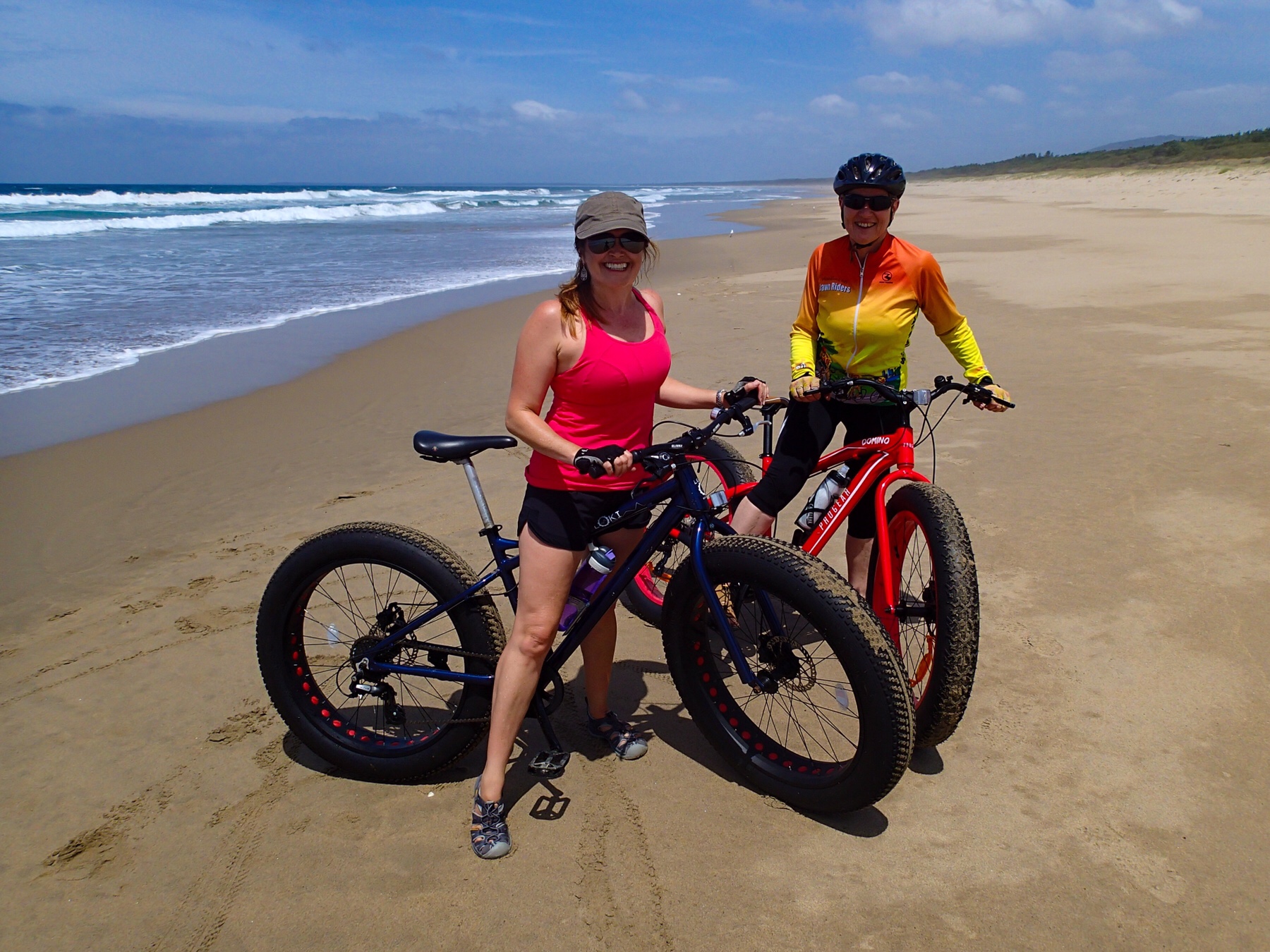 We returned for a fabulous salad of fresh produce from Barb and Omar’s garden and sheep cheese for lunch.

Tassie likes it here. We popped on her lead and she happily explored the garden, getting a fright when a giant hare leaped out of a bush in front of us and bounded off into a nearby field. Tassie’s first hare!

As the afternoon drew on we could hear thunder rumbling in the background and the sky grew dark. Mr A and Omar fitted up a light bar into Barb’s newly renovated kitchen, and we commenced preparations for the evening’s dinner. A particularly loud boom from the heavens and most of the power went off – notably in the kitchen. Not exactly ideal for dinner preparations. Barbara, cool as a cucumber, changed plans slightly and dinner went into a slow cooker plugged into a circuit powered by the Tesla battery, accompanied by rice in a rice cooker, and vegetables on the BBQ. Dinner solved!

Two other friends, Alan and Jo who live a short drive away on the other side of Berry, joined us for dinner – a fun evening ensued of wine, laughter and stories of goats. A great night and our first evening past midnight for the trip!