I packed up a very soggy tent, the mist thick in the valley, and headed beck in the car to the little village of Dwellingup. I love this place, its a bustle of activity with an adventure race on, people in hiking boots stomping around, motorcyclists at the pub reliving the twists and turns of the roads around the area.

It was my birthday, and the treat I’d planned was to do an overnight ride on a small section of the worlds longest off-road bike trail – the Munda Biddi. The trail stretches from the hills just east of Perth all the way down to Albany on Australia’s far south coast, a cool 1100km of marked trail.

Touring on the dirt, carrying all your camping gear, preferably avoiding bulky panniers to better enjoy the riding, that’s we call bikepacking. Backpacking with a bike. And I love it – especially solo – I can ride at my pace (not fast!), stop and make a brew when I fancy (which is quite a lot).  It’s certainly easier carrying gear on a bike than on your back, well until the trail gets steep….You can also cover more distance than on foot and explore further, without mixing it with cars that much.

So the first task was to load the bike, no mean feat as you can see from this photo. Can you spot the item that didn’t make it in? 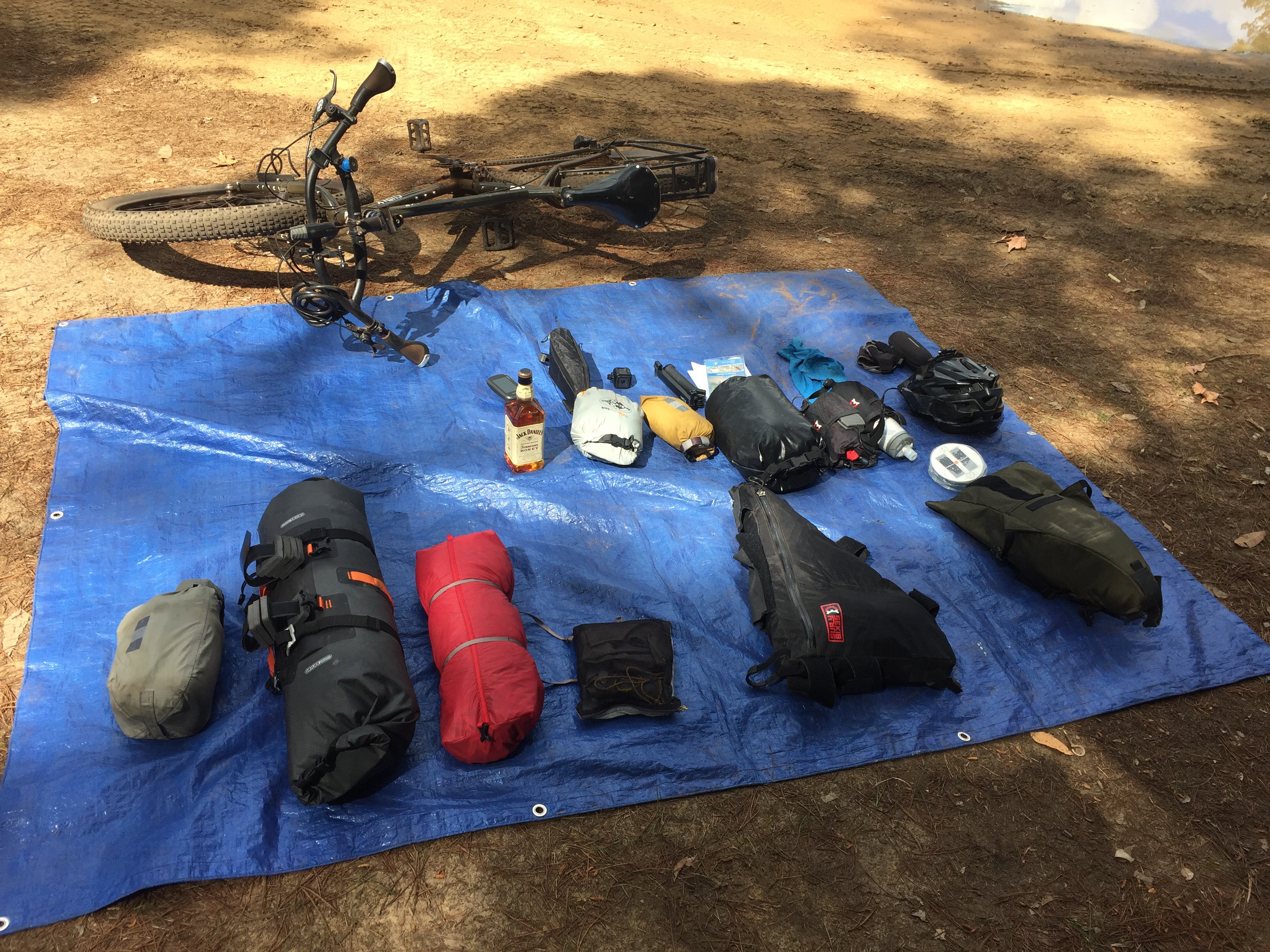 The bottle of Jack? Well done…it was my birthday after all. No harm trying.

So everything is finally loaded and its already early afternoon. The bike is looking her impressively, dark, looming self, and I’m ready for the off.

Now my training preparation for these rides is called the “muscle memory method” Let me hereby declare at 61 years of age, that no longer works! On the first steep hill I find myself “hiking the bike”, pushing 35kg of dead weight up slippery pea gravel.

The pain was soon forgotten though when I warmed up and hit some gentler track. The jarrah forest is really spectacular and after a long break from the woods through the arid north of WA, the scenery was touching something primeval in the lizard part of my brain. Which, as some of you know, mostly gets activated after a few too many.

The trail took me back along the river that I had been paddling, and then further deep into the upper reaches of this reserve. Really wonderful trails that just wandered along through the magifncent strands of giant jarrah. 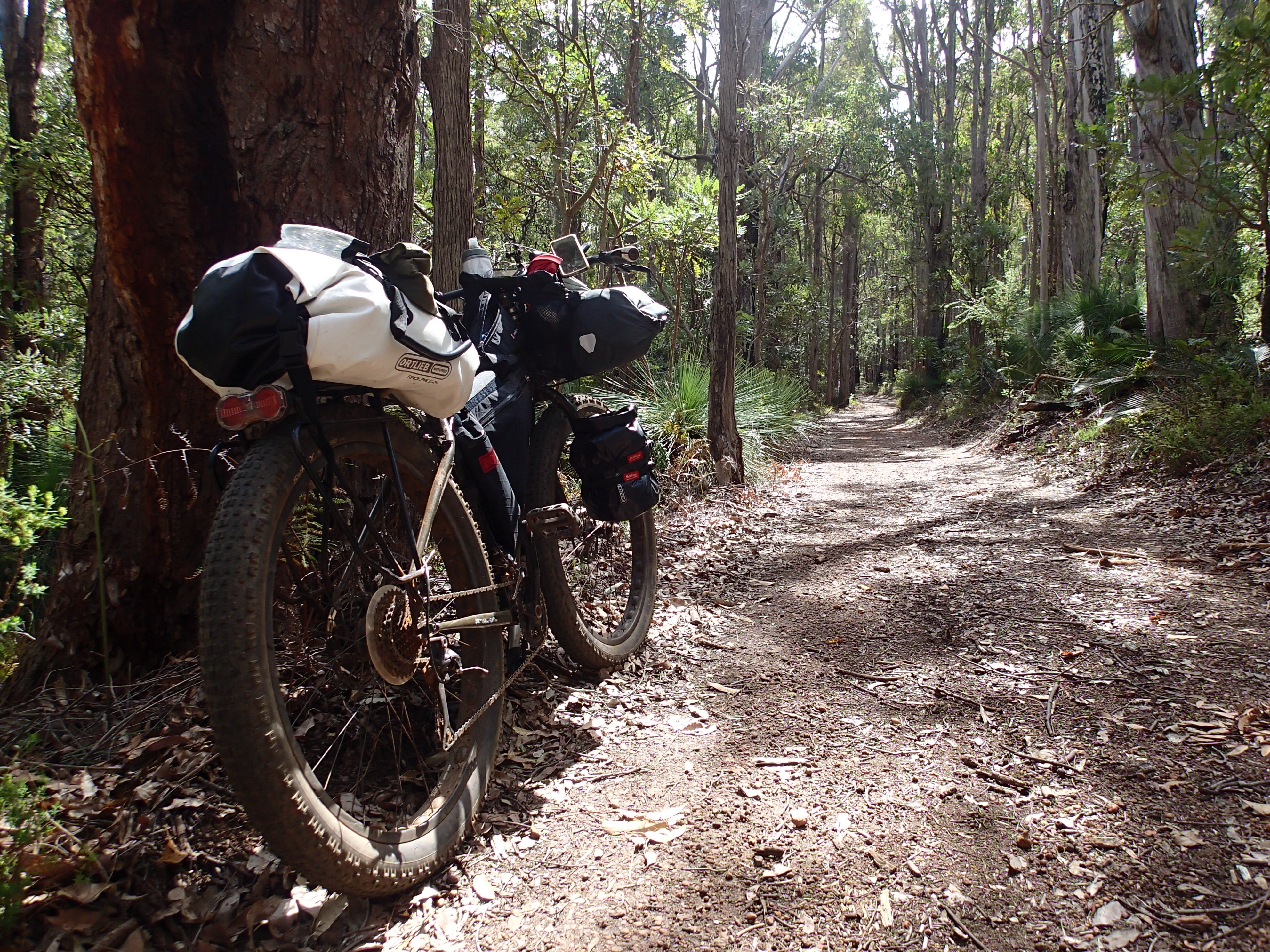 I only saw one other group of riders on the track the whole afternoon. Alone with my thoughts I pondered why it is WA invests in a trail like this, and NSW with similar country down the Great Divide does not. Our state can barely get their act together to join up the few off road cycle paths we do have.

It was late afternoon and it was already starting to get chilly when I arrived at the “hut” that was to be home for the night. 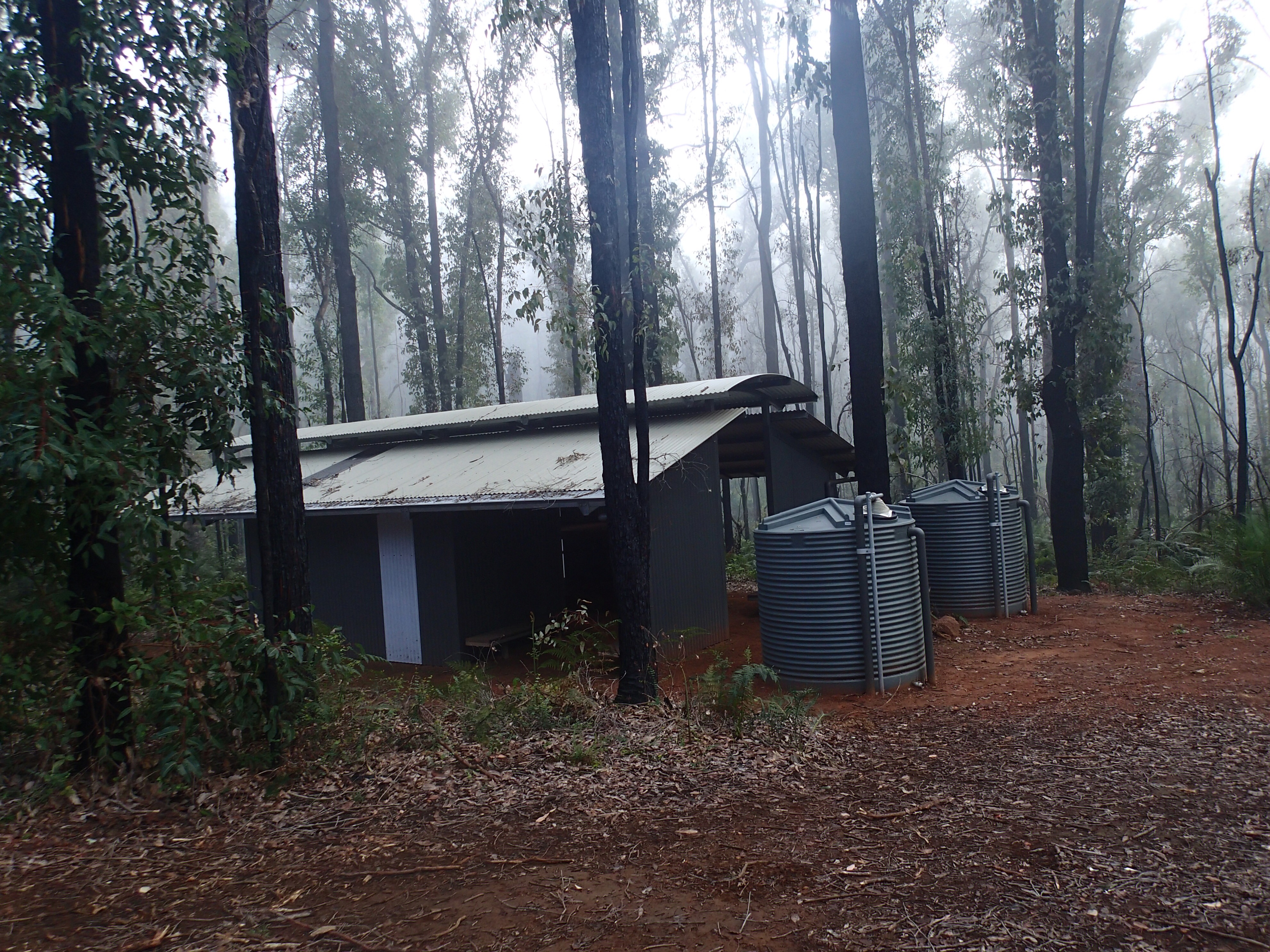 Now I had brought my tent as apparently it was a “busy weekend” and yet not a soul was there. No doors and ends to the building either. The temerpature was dropping to single figures at night so I shivered with anticipation, and not in a good way. I soon had a brew going and my “one pot dinner” bubbling. The latter was a disaster. If you ever see “Sharwood’s Indian Side Dishes”, put it down and move away from that aisle. Oh yuk…Having planned for my culinary poor judgement out came the wraps, Vegemite and cheese. Much better. Then it struck me, here I am on my birthday, choosing to be own my own in the cold, dark, damp woods with not even a tot of bourbon to keen me company? What was I thinking? Well, what I was thinking was “Carpus Diem” (seize the day). I had the privilege  to watch a great leader marshall a group of us sometimes riders around this philosophy and inspired us to do just that. Dave Curran, now CIO at Westpac, got us out there pushing ourselves, both on and off the bikes. I want to take advantage of every chance while I have my legs and lungs to get out there. Even if it happens to be my birthday and I “should” be “celebrating”. This was my celebration of being 61.

The morning dawned not early enough for me, after my air bed decided to have an “unplanned flattening” in the early hours. That was a low point, literally!

I was packed and off into the mist at sparrow’s. 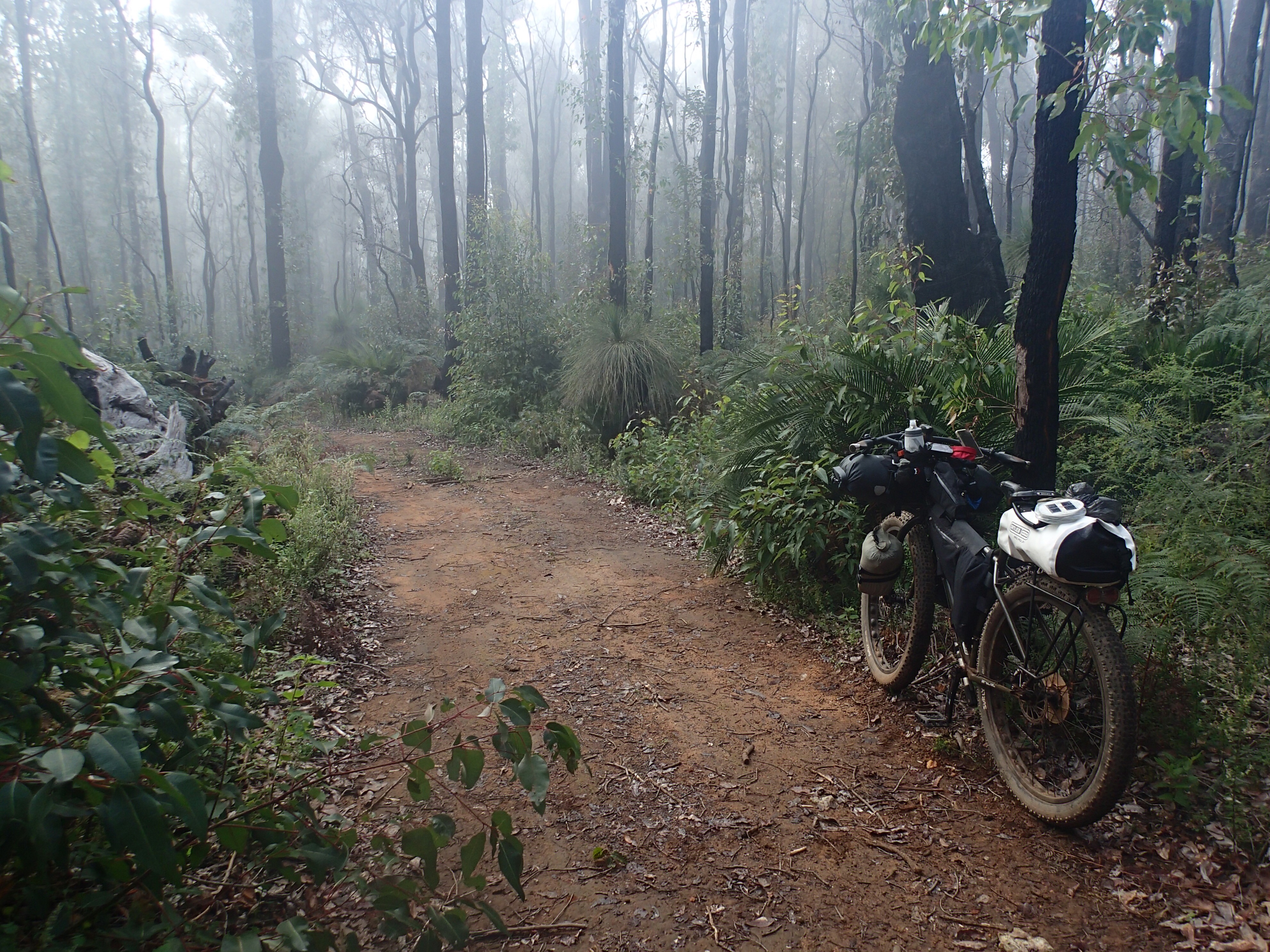 Retracing my steps back to Dwellingup, I made it to the pub for a some much needed calorie replacement. A great couple of days. A micro adventure  – turning dreams into memories – I won’t forget my 61st birthday. 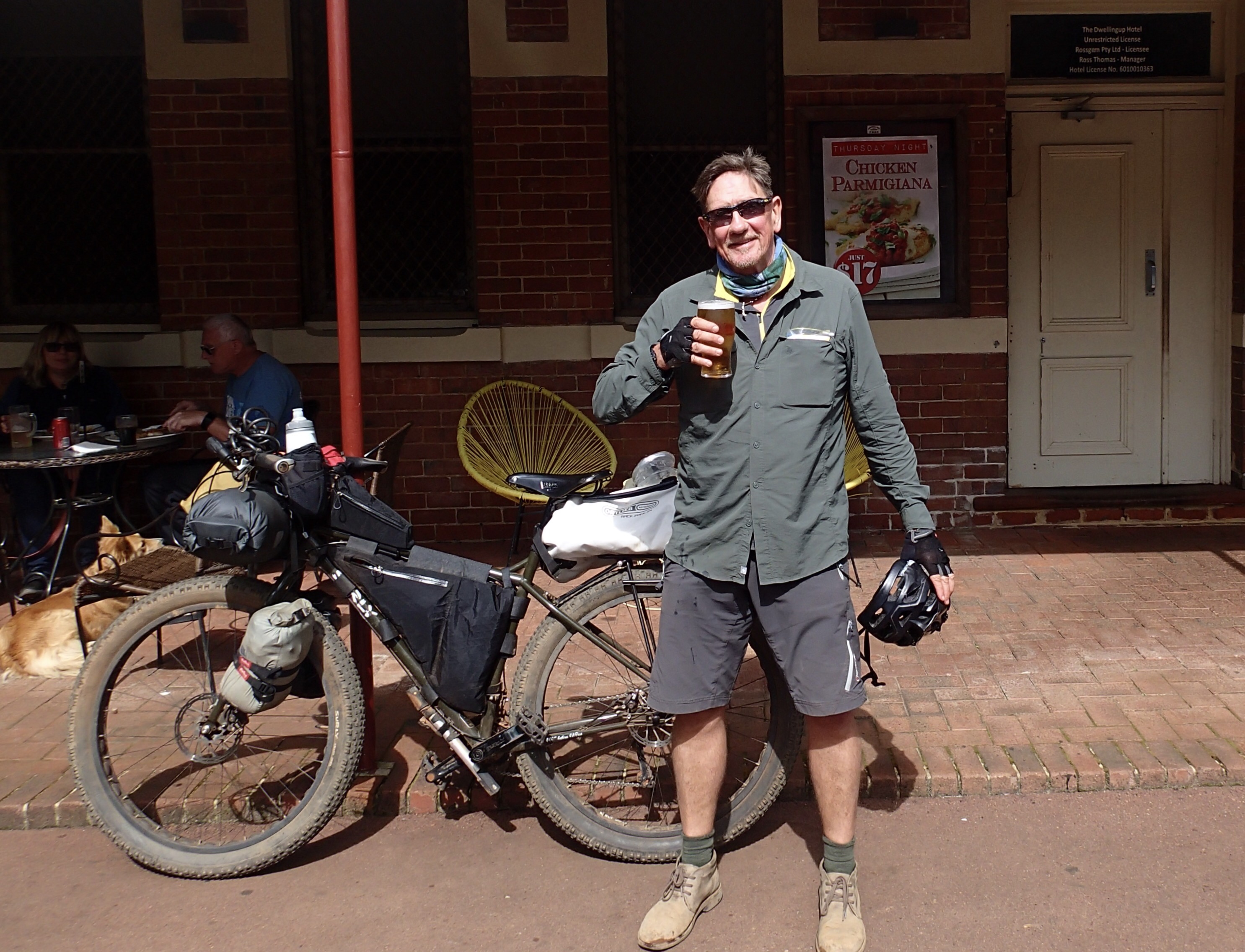